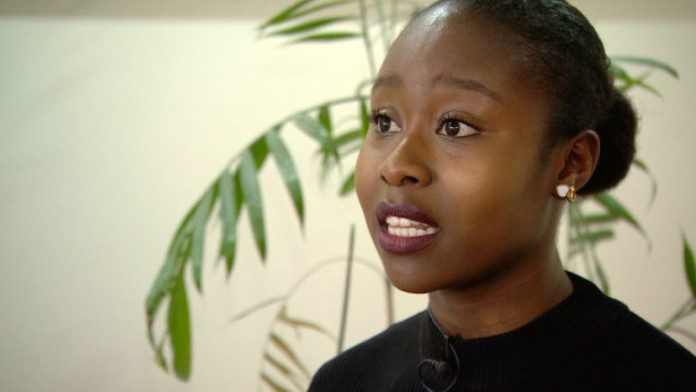 A Canadian waitress of Ghanaian origin, recently quit her job after her manager sent her home because she couldn’t wear her natural hair down. Akua Agyemfra was excited when she was hired ‘on the spot’ for a waitress position at a Jack Astor’s Bar and Grill in Toronto, but she says she was sent home on her third day of training because of her natural hair.

Assistant manager Sabrina Chiodo allegedly told the 20-year-old that female waitresses needed to wear their hair down per company policy. On the previous two training session, Agyemfra had extensions in but she wanted to give her natural hair a rest so decided to take the extensions out on her third day of training. In her meeting with Chiodo, Agyemfra took her natural hair out of its bun so she ‘could see it doesn’t go down’.

While Agyemfra says Chiodo ‘understood’ that she couldn’t wear her hair down, she nonetheless sent her home anyway. ‘She was really nice about it,’ Agyemfra told CBC. ‘She said a lot of the girls were talking about my hair and that it was in a bun and theirs isn’t. But it kinda sucked.’ But after leaving work that day and speaking about the incident with her family, she decided to quit her position and tell her story to CBC

She admits ‘a lot of Caucasian people don’t really understand’ African hair but it still ‘doesn’t take away from the fact that she sent me home’. ‘I know most black women at restaurants are forced to wear wigs or weaves or extensions, or are forced to straighten their hair everyday. ‘Don’t get me wrong, I think extensions look great. I’ve been wearing them ever since I was a little girl. I love when I get my braids. It’s the protective style I choose and works for me.

But why am I scrutinized when I decide to to take them out? That’s not fair. ‘I’m not going to compromise my roots and edges because my employer wants me to. My scalp has a right to breathe just as much as the woman standing beside me,’ she said. Company spokesman Kathryn Long responded to the story by saying that Jack Astor’s waitresses are allowed to wear their hair down or in a ‘stylish up-do’. It’s unclear how Agyemfra’s bun did not quality as a ‘stylish up-do’