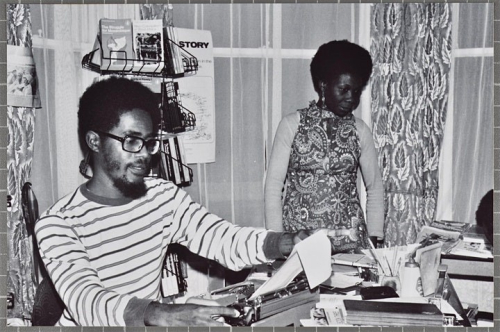 Dr. Walter Rodney (1942-1980) was an acclaimed Pan-African historian and Marxist theoretician from the time he graduated from the London School of Oriental and African Studies (SOAS) in 1966.

Rodney soon took a faculty position at the University of Dar es Salaam in the East African state of Tanzania, which was a center during the 1960s and 1970s for the national liberation movements fighting across the continent against western imperialism.

The historian and political activist was assassinated on June 13, 1980 in the capital of his home country of Guyana, Georgetown, located in South America. Rodney had returned to Guyana in 1974 after being offered a faculty position at the university. Viewing his appointment as a potential threat to the People’s National Congress (PNC) government of then President Forbes Burnham, his job offer was revoked.

Rather than return to Tanzania, another African country or a university in North America, Rodney chose to stay in Guyana and delve into the internal politics of the country. By 1979, Rodney had transformed along with other veteran activists, the Working People’s Alliance (WPA) as a political party in an effort to build unity among the working people of Guyana, who had been largely divided along ethnic lines between the slightly majority East Indian, Asian population pitted against the African descendants.

After the assassination of Rodney, the administration of Burnham claimed that the historian was attempting to plant a bomb outside a government building. His brother, Donald Rodney, was charged with being an accomplice in the alleged crime and sentenced to a term in prison.

Many people within the Left, Pan-African and progressive academic communities were in disbelief of the Guyana government’s explanation related to Rodney’s death. Blame was placed on the Burnham administration which continued to deny involvement.

Over four decades later, with the prodding of his widow, children and comrades within the WPA which remains active in Guyana politics, the government shifted its position recognizing Rodney as an historian while changing his death certificate to indicate he was murdered. The original death certificate stated that Rodney was “unemployed” although he was still working on academic projects by writing a History of the Guyanese Working People, which was published posthumously.

An article published on the recent developments in Guyana says: “In April this year, the Court of Appeal, set aside the conviction that linked the 69-year-old Donald Rodney to the assassination of his brother. The Court of Appeal also set aside the 18-month sentence for possession of explosives against Rodney, said to have been the only eyewitness to the assassination of his brother, who was the co-leader of the Working People’s Alliance (WPA). In 2014, a Commission of Inquiry declared that Rodney’s death was not a misadventure but rather an assassination and Attorney General Nandalal also told legislators in parliament Thursday (June 10) that the death certificate will be amended to delete the words ‘misadventure’ as the cause of death.” (https://www.newsamericasnow.com/caribbean-news-guyana-news-walter-rodney-gets-due-41-years-later/)

The person identified during the 2014 tribunal as the individual which lured the Rodney brothers to the location, Gregory Smith, was a security operative of the Burnham administration. This individual was later sent to another Caribbean territory, French Guiana, and never held accountable for the killing. He is reported to have died in 2002.

Since 1980, the writings and lectures of Walter Rodney are still in circulation. Although the situation in Africa, the Caribbean and South America has changed in regard to the level of mass mobilization and political debate, the underlying conclusions of Rodney’s approach to analyzing the historical development and social conditions of the peoples of Africa and the world remains fundamentally sound.

Imperialism is continuing to exploit and dominate the majority of the peoples of the globe while the struggles of working people, the peasantry, youth and revolutionary intellectuals are ongoing. The current battle against the COVID-19 pandemic illustrates clearly once again the marginalization of the peoples of the Southern Hemisphere through the denial of pharmaceutical products including the billions of doses of vaccines needed to aim at protecting population groups from infection, serious illness and death.

The Significance of Walter Rodney in the 21st Century

Rodney’s academic and political work was done during the period of 1966-1980 amid an upsurge in the struggle for national liberation and socialism in Africa and other geo-political regions. Tanzanian President Mwalimu Julius Nyerere, the leader and co-founder of the Tanganyika African National Union (TANU), oversaw not only the independence of his country in 1961 he was a committed force within the efforts to build socialism inside the country and the continent.

In 1967, TANU issued the Arusha Declaration which called for socialist construction in the post-colonial state attempting to overcome the legacy of imperialism and its concomitant results which are impoverishment and general underdevelopment. Rodney had researched the Atlantic Slave Trade and its impact in the Upper Guinea Coast of West Africa for his dissertation at the SOAS. Therefore, he was well acquainted with the challenges facing the continent even after national independence.

By 1968, Rodney had accepted an offer as a visiting scholar at the University of West Indies in Jamaica. During his stay in Jamaica, he held lectures for people within the community attracting broad interests. In August of that same year, Rodney traveled to Montreal, Quebec (Canada) to speak at the Black Writers Conference that was attended by numerous luminaries of the time including Stokely Carmichael, James Baldwin, CLR James and James R. Forman.

In attempting to return to Jamaica, he was denied admission back into the Caribbean-island nation. Youth and workers rose up in rebellion leading to him being banned inside the country for many years afterwards. A series of his lectures in Jamaica was later published under the title: “The Groundings with My Brothers.”

Rodney then returned to the University of Dar es Salaam where he continued historical research resulting in the publication of his most famous work: “How Europe Underdeveloped Africa”, a book issued by the Tanzanian government in 1972. Two years later the book was reprinted by Howard University.

His return to Guyana in 1974, led to his involvement in opposition politics inside the country during the mid-to-late 1970s. Due to his WPA activities, Rodney and several of his comrades were indicted for arson by the Burnham administration in 1979. The impending threat by the government made many of his comrades and colleagues fear that his life would be taken.

Prof. Issa Shivji, who had been a student in Tanzania at the time of Rodney’s arrival in 1966, would later become a faculty member at the University of Dar es Salaam during the early 1970s in the field of law. Shivji recalled in a tribute paid to Rodney in 2012 that at the time of Zimbabwean independence in April 1980: “On his way to Zimbabwe, and this was a time when the movement was in trouble, he passed through and stayed with one of our comrades here. This comrade told him, ‘Walter stay, don’t go back. Guyana is dangerous.’ There was a case against him in court. Walter said, ‘No, I cannot just run away. I have to go back.’… It’s more believable that he was pulled because he felt he could make his contribution there, in Guyana. And he did, in my view. One can make critical assessments in hindsight, but one of the things we appreciated, and came to learn from, the Party, the WPA, was how it managed to bring together Indian and African youth.” (https://monthlyreview.org/2012/12/01/remembering-walter-rodney/)
Just three years ago in 2018, a series of lectures for a course Rodney developed at the University of Dar es Saleem on the History of Russia, the Bolshevik Revolution of 1917 and later efforts to build socialism, was finally published after nearly five decades. The book is perhaps the most comprehensive view of the Russian Revolution, the Union of Soviet Socialist Republics (USSR), socialist construction and its relevance to the African independence movements in the struggle for socialism and continental unity.

The announcement by the Guyana government earlier in the year was a welcome development for many people. It was also revealed that a Walter Rodney Chair in the History Department at the University in Guyana will be established. These events illustrate the importance of Rodney’s work and the necessity of the continuation of the study and application of his writings, lectures and political activity.