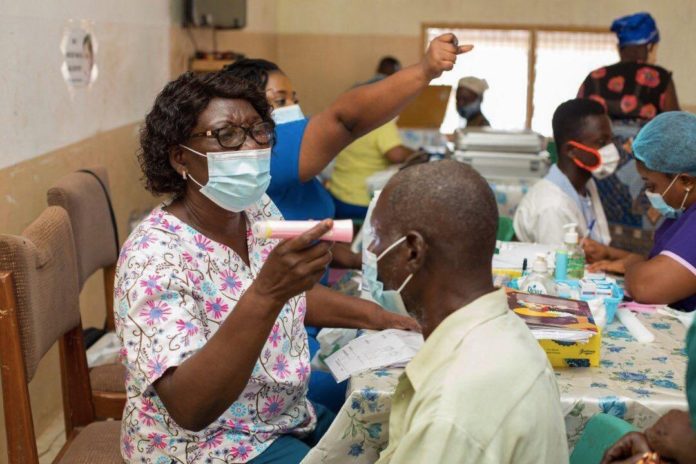 Investing in the lives of host communities by contemporary corporate entities is becoming the mainstay for addressing some basic but critical needs of communities.

Corporate support from such entities as part of their social performance strategies has over the years brought great relief to communities.

It enables them to access general/specialised healthcare, educational scholarships and infrastructure.

Such supports help birth entrepreneurs and create jobs among others, which improves the livelihood of the beneficiaries.

Since its inception in Ghana almost a decade ago, the West African Gas Pipeline Company limited (WAPCo) has, after careful interactions with people in its host communities in the Greater Accra and Western regions, identified and carried out various interventions that have touched lives.

One of such interventions is a specialised annual medical care service for people with eye problems in host communities.

Seven communities – Kpone and Tema Manhean in the Greater Accra Region and Dwomo, Aboazde, Lower Inchaban, Shama and Abuesi in the Western Region – have over the years benefited from free annual eye screening, in collaboration with eye specialists from the Korle-Bu Teaching Hospital.

For more than half a decade, the Company’s eye screening programme has helped meet the critical needs of a large number of people – young, old in the host communities, many with no access to specialist care.
Statistics.

A study by the Journal of Environmental and Public Health indicates that an estimated 40 per cent of the country’s population has little to no access to eye care.

As a result, more than 200,000 individuals in the country are blind. More than half of these cases are due to cataracts, and glaucoma. The conditions are, in many cases, preventable.

The World Health Organization’s (WHO) data indicates that one billion people around the world have preventable vision impairment or one that is yet to be addressed.

The data shows that reduced or absent eyesight could have major and long-lasting effects on all aspects of life, including daily personal activities, social interactions, school and work opportunities and the ability to access public services.
Referrals

At the just ended WAPCo eye screening in the two regions, more than 2,000 beneficiaries received care, with some provided with medicated glasses, eye-drops and other medicines as well as care for other eye conditions.

Those identified by the team with severe conditions were referred to the Tema General Hospital and the Korle-Bu Teaching Hospital in Greater Accra and Effia-Nkwanta Regional Hospital in the Western Region.

The Eye Specialist in charge of the outreach programme, Dr Gladys Fordjour, said some of the cases that came up had the potential to affect the patients’ eyes if not taken seriously.

“We have also seen cases of glaucoma and one unfortunate thing about glaucoma is that when you are blind, nothing can be done about it which has been one of our concerns,” she said.
Regular checkups.

The eye screening exercise instituted by WAPCo, Dr Fordjour said was timely, “as some of the cases that came to us here were quite serious and we referred some to seek additional care at the centres.”

Dr Fordjour said most of the health facilities in the communities did not have specialised eye services thus making WAPCo’s outreach programme very important for regular checkups, for all and especially those above 40-years.

She said some people also had systemic diseases such as diabetes and hypertension, linked to the eye problem.

Dr Fordjour said the team examined some children as well and “we also have noticed children with cataract tumors and with glaucoma which require attention.”

The External Relations Manager of WAPCo, Mr Mark K. Mensah, said WAPCo identified the medical outreach as a critical intervention, which was agreed upon through consultations with members of the beneficiary communities.

He said communities selected had some appreciable health care facilities but lacked specialized services such as optometry, though poor eyesight and related conditions were a common challenge.
Emerging cases.

Mr. Mensah also expressed concern about the emerging cases of glaucoma in children, saying “The sad part of glaucoma is that it does not show any symptoms until it’s too late, which has resulted in many losing their sight.”

“Therefore realising that there are varied eye problems in our host communities with no specialist services, we agreed with the people, after broad consultations, to provide annual eye care for them and it has helped greatly.”

The Company, he said, aside from the medical care for host communities in Greater Accra and the Western Regions, had built a Community Centre at Aboadze, a maternity facility for the Tema Manhean community in Tema, and a teachers’ quarters for Kpone as well as instituting a scholarship programme for brilliant but needy children.
Other supports.

“We have also extended supports to students pursuing various programmes in universities and those who want to go into vocational training. WAPCo designed a scheme called Community Youth Enterprise Scheme (CYES) to support them in that direction, and supported them with tools to start businesses”, he said.

In these seven coastal communities, the main occupation is agriculture – fishing, fish processing and some commercial activities within the communities in the districts dotted with industrial activities.

Some community members – fishermen, fish processers and traders said over the years, the eye-care programme by WAPCo had brought joy to them and taught them how to value and take care of their eyes.
Exceeding targets.

In Kpone and Tema, the aged were aided to the venue. The medical team had to make provision for additional numbers after they exceeded their daily target.

The same could be said about the first point of call, Aboadze in the Shama District, the numbers were huge. The story of Abuasi was no different.

Many of the residents in Shama, Lower Inchaban and Dwomo said annually they had had support from WAPCo aside from eye-care.

They mentioned an entrepreneurship scheme, which some of the youth in the community benefited from.

Maame Araba, who processes fish in the community, said annually she avails herself for the screening – “it has helped me because the doctors take their time to explain to me what to do.”

Madam Grace Nketsiah in Shama said she had a problem reading and was unable to identify figures on her phone, however, after going through the process she was given reading glasses.

Others said they received useful advice on how to take care of their eyes and when to visit the doctor to ensure they received timely eye care.

Mr William W. Atiapah, a beneficiary, said the medical outreach was critical for the residents, who were living in industrial areas in Tema, with factories emitting smoke and dust.

“However, our biggest challenge has to do with the referral, when we are referred, we don’t have the money for the surgery, therefore, it becomes very difficult for us to get further attention,” one of the beneficiaries said.