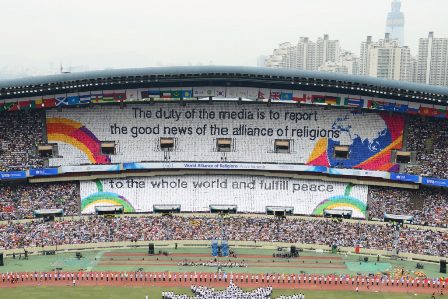 This summit was groundbreaking in that it presented ?the World Alliance of Religions? as a concrete proposition for realizing the cessation of wars and world peace. The first measure is to sign the Unity of Religions Agreement, and the second measure is to present the Agreement to Propose the Enactment of an International Law for the Cessation of Wars and encourage political and religious leaders around the world to participate. In this regard, the summit is expected to serve as a starting point for opening a new era of world peace.

The WARP Summit was hosted by Heavenly Culture, World Peace, Restoration of Light (HWPL, Chairman Man Hee Lee), which is a purely non-governmental organization, and it was attended by 33 former and current heads of state including presidents, vice presidents, and prime ministers from 15 countries. Stjepan Mesic (former President of Croatia and former President of the Presidency of Yugoslavia), who was among the attendees, said, ?This occasion where the heads of state and religious leaders came together for peace is unprecedented. Mr. Man Hee Lee?s idea is really amazing and excellent. This wonderful event will definitely play a positive role in bringing wars to an end and achieving world peace.?

The fact that over 712 religious leaders from 110 countries agreed on the idea of ?the World Alliance of Religions? and that they came to the Republic of Korea all the way from foreign countries has a significant meaning in the history of religions. Giani Gurbachan Singh, Jathedar of the Akal Takht, emphasized in his speech at the opening ceremony that ?All scriptures are telling us that religions must unite. A religious leader who speaks of division and conflict is not a religious leader.?

The WARP Summit was actively supported by people from all walks of life. Since young people are the biggest victims of war, it is natural that over 500 representatives and members of youth organizations in 134 countries attended the event. Also, women?whose sons and husbands participate in war?actively participated in the WARP Summit. The fact that women?s organizations, including the International Women?s Peace Group (IWPG, Chairwoman Nam Hee Kim), played a key role in the event was enthusiastically received by the foreign press. Over 200 reporters of more than 100 media organizations from 80 countries reported the full schedule of the WARP Summit to their countries in real time at the official press conference, held as a pre-event at Walkerhill Hotel Convention Center.

An anchorman of a famous broadcasting station, who asked not to be named, said, ?I have often heard of the peace movement of Mr. Man Hee Lee, so I came to this event. The message that he delivered to the heads of state and religious leaders around the world for the cessation of wars and the achievement of world peace was impressive. The message of Ms. Nam Hee Kim saying that women are working together for world peace in the spirit of motherly love in order to protect children really touched my heart.?
On the first day of the WARP Summit, the opening ceremony was held at Seoul Olympic Stadium. The event was attended by approximately 200,000 people both inside and outside of the stadium, establishing itself as the biggest event ever for peace. The Card Section performance by 12,000 members of the youth organizations presented a spectacular view and delivered the message of peace to the whole world. On-ground performances expressing the wish for peace also left an unforgettable impression on the attendees.

At the opening ceremony, a congratulatory video message from Archbishop Desmond Tutu, the spiritual leader of South Africa and recipient of the Nobel Peace Prize in 1984, attracted much attention. In his message, he said, ?I would like to congratulate both Chairman Man Hee Lee and the members of HWPL for hosting the World Alliance of Religions? Peace Summit. Thank you for delivering the message of peace and the cessation of wars to the whole world.?

On the 18th, the second day of the WARP Summit, religious leaders proclaimed they will transcend religion and denomination and embark upon the establishment of the unity of religions in order to bring about world peace. Twelve religious leaders, including Antonio Ledesma (Archbishop of Cagayan de Oro, Philippines), Swami Chidanand Saraswati (the president of Parmarth Niketan Ashram), Martin De Jesus Barahona (Bishop of the Anglican Episcopal Church of El Salvador), and Giani Gurbachan Singh (Jathedar of the Akal Takht), participated in the signing ceremony of the Unity of Religions Agreement. Through this agreement, they declared to work with people all around the world to realize world peace through the unity of religions, saying, ?All religions must unite as one under the name of God.?

Representatives from different nations gave speeches under the theme of ?Religious Conflicts and World Peace? on that day. The event was attended by heads of state, ambassadors, and other dignitaries. Five group sessions also took place that afternoon to encourage participants to share methods of cooperation to achieve the cessation of wars and world peace. Representatives from each nation including political and religious leaders, prime ministers, and chief justices attended the various sessions. The Agreement to Propose the Enactment of an International Law was declared along with Unity of Religions Agreement, and political leaders and government officials of the world pledged to be on the frontlines of spreading the necessity of enacting an international law to bring cessation of wars.

On the last day of the event, the 19th, a total of 200,000 people, including the participants of the Summit, the members of youth and women?s groups, and local citizens, participated in the Walk for World Peace near Seoul Olympic Park. This event, hosted by the International Peace Youth Group (IPYG), commemorated the huge success of the World Alliance of Religions? Peace Summit, attended by about 600 members from youth and women groups representing organizations in 139 countries.

Mr. Man Hee Lee, the chairman of HWPL, emphasized the realization of the cessation of wars and world peace through the unity of religions in numerous meetings with the media. This was stressed through a press conference with foreign media that took place on the day before the opening ceremony. Another press conference with national and international reporters was held at the conclusion of the Summit on the 19th. Mr. Lee said that through the World Alliance of Religions? Peace Summit, ?The wars within humanity can be avoided by the determination in our hearts, and we can accomplish a world of peace to leave as a legacy for our future generations.? He also brought attention to the role of those of faith, the religious people, for this purpose. Mr. Lee also encouraged the media from different countries of the world to frequently report on the peace agreement signed at the Peace Summit.