Scotland became the first place in the world to implement a minimum price for alcohol on Tuesday.

New legislation by the Scottish Parliament came into force setting a minimum price of 50 pence (70 U.S. dollars) for each unit price.

Politicians have imposed the pricing regime to tackle the damage caused by cheap, high strength alcohol, with research showing it is expected to save 392 lives in the first five years of implementation.

The policy will add more than 4 U.S. dollars to a price of whisky.

Scotland’s Minister Nicola Sturgeon said: “I am extremely proud that the eyes of the world will once again be on Scotland with the introduction of this legislation. Our action is bold and it is brave, and shows once again that we are leading the way in introducing innovative solutions to public health challenges.

“It’s no secret that Scotland has a troubled relationship with alcohol. There are, on average, 22 alcohol-specific deaths every week in Scotland, and 697 hospital admissions and behind every one of these statistics is a person, a family, and a community badly affected by alcohol misuse.

“Given the clear and proven link between consumption and harm, minimum unit pricing is the most effective and efficient way to tackle the cheap, high strength alcohol that causes so much damage to so many families.”

According to Scotland’s Health Secretary Shona Robison, alcohol misuse costs Scotland 3.6 billion pounds (5 billion U.S. dollars) each year and Scotland has the highest rate of alcohol-related deaths in the UK.

The measure was first proposed five years ago but has faced a lengthy legal battle by the Scottish Whisky Association challenging the policy in the courts. Critics have also said higher prices will unfairly punish responsible drinkers. 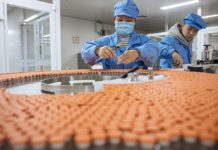