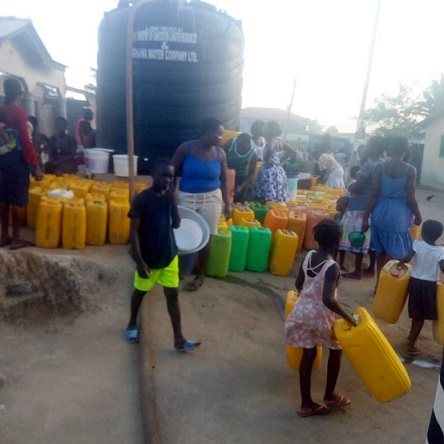 Residents of Aboadze and Abuesi, two fishing communities in the Shama District of the Western Region, have been battling perennial water shortage for the past nine months.

Trekking to the Volta River Authority (VRA) area and to Inchaban, a nearby town with the yellow gallons, popularly known as ‘Kufuor gallons,’ in search of water have become a daily routine for the residents, particularly women and children.

The situation, they say, is affecting their socio-economic activities.

In an interview with the Ghana News Agency (GNA), the assembly members for the two communities; Mr Emmanuel Avevor for Aboadze, and Mr Ezekiel Acquah, for Abusie, and some unit committee members, indicated that efforts to get the problem solved had not been successful.

They said information from the Ghana Water Company Limited (GWCL) indicated that the problem was due to the dysfunction of old pipelines, which were laid through Nyankrom, a suburb of Shama, to supply water to the two communities.

A visit to the booster station of GWCL at Inchaban by Mr Avevor and some unit committee members confirmed the explanation by management of the GWCL that the inner layer of the pipelines had been corroded, thereby partially blocking the easy flow of water.

Mr Avevor, however, blamed the situation on the activities of the Twyford Ceramic Tiles Company, operating in the area, which drew water from the said pipelines to manufacture their products to the detriment of the communities.

He expressed the belief that the activities of the company had aggravated the water crisis of the twin fishing communities.

He, therefore, appealed to the Takoradi International Company (TICO/TAQA) and the VRA to, as a matter of urgency, commit financial resources to either divert or construct new pipelines from Inchaban to Aboadze and Abuesi.

According to the GWCL, GHC2,432,556.00 was needed to lay new pipelines to the communities.

Though management of the two companies; TICO/TAQA and the VRA, accepted the request in good faith, the huge cost has made them disinterested in furthering the funding.

However, Nana Kobina Attom III, Chief of Aboadze, and Nana Amakye II, the Abusie Chief, have expressed worry over the situation after several attempts to find an effective remedy had hit a snag, while the people struggled for water on daily basis.

They bemoaned the lackadaisical stance of the Shama District Assembly in helping to solve the problem having been notified several months ago.

The chiefs pleaded with the Assembly to attach some importance to their plight and put in place effective measures to address the problem, as “water is life”.

All efforts to get the Assembly for its side of the story has proved futile.