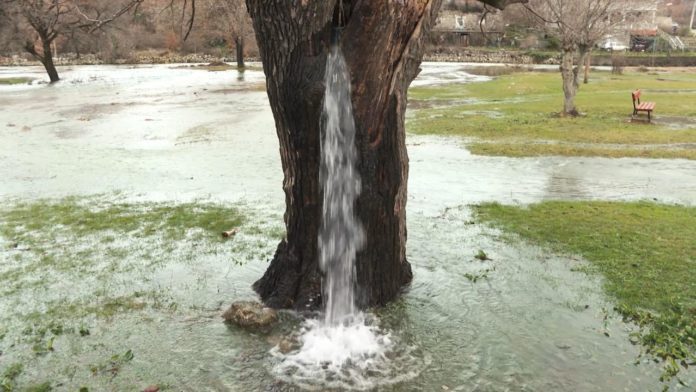 A news story alleging that water is flowing purportedly from a tree at Adidome, Central Tongu District, Volta Region, making the rounds particularly in the social media, has been found to be a hoax.

The Ghana News Agency on Wednesday, January 23, visited the Post Office square at Adidome, where the said supernatural tree is located, and found nothing unusual as it is being speculated.

There is rather a public pipe stand having two taps and two control knobs for water collection; and one of the taps connected to a water hose affixed to the tree, about eight feet high.

Water purchasers stand with their bowls on their heads to draw water from the hose fixed to the tree by the control knob on the pipe stand as it is seen in many places.

Madam Victoria Sowu, 65, the attendant to the public water stand, owned by the Roman Catholic mission at Adidome, told the GNA that she was also surprised with the various reports which was attracting people to the two decades old facility.

On how the hose was affixed to the tree, she said it was her own daughter, one Abigail Lawoe, who over 15 years ago cut and planted the small fresh tree by the pipe stand and fixed one end of a water hose to it by a rope and the other point connected to one of the pipes down.

Madam Sowu said this was to enable water purchasers to stand with their bowls on their heads to collect water through the hose turned on-and off by a control knob, while others collect water from the other tap.

She said the tree sprouted over the years to hide the hose, from where the water flows.

Madam Sowu said the hoax was probably started by some mourners from the Afram Plains and Dzemeni in the Eastern and Volta Regions, respectively; who seeing that unique facility for first time failed to take a closer look.

A Roman Catholic Priest in charge of the Risen Christ Parish, Adidome, owners of the water facility, who did not want his name used, also denied the story of a supernatural water flowing on his premises.

“The phenomenon is no miracle – it is man-made”, he said.

Meanwhile many people have continued to troupe to the place to view the said miracle.

The GNA met some clergy from Ho, coming to view the situation and indeed they saw the truth.