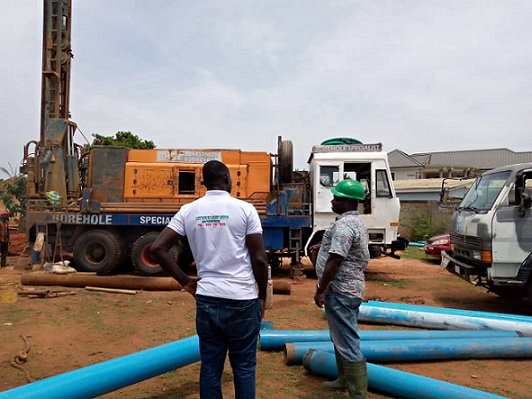 A water project to serve about 13 communities in the Viepe-Tokor Electoral Area in the Ketu South Municipality has taken off.

The communities to benefit from the about GH¢287,000.00 Government of Ghana and Internally Generated Fund project would include Kubakope, Hatsukope, Laklevikope, Aletame, and Dakar who had been grappling with potable water for about eight years.

At a brief ceremony to cut sod for the ongoing project involving drilling and laying of pipelines among others, Mr Elliot Edem Agbenorwu, the Municipal Chief Executive for Ketu South said the small water system would soon be ready to solve the water needs of the people.

He said the Assembly relentlessly searched for a suitable location to site the project disclosing that after several unsuccessful attempts, they arrived at the current location where enough water to serve the electoral area and adjoining ones were discovered.

Mr Agbenorwu called on the people to use the water judiciously upon completion of the project so that not just the electoral area but others could depend on it for long reminding them that “as you are aware, Ghana Water Company Limited has been off for over a year and as a result, Aflao, Denu and other areas have no water.”

Torgbui Pasaku IV, Dufia of Hatsukope thanked the Kuba family for releasing the land for the project which he hoped would solve the long years of suffering of the people to get water for domestic use.

Mr Victor Ayaku, Assemblyman for the area said the thought of the ongoing water project was such a relief to his people and prayed for early completion so they could begin to enjoy it.

“Formerly, we were getting water from the tank at Saint Paul’s Senior High School (SPACO) and then a fault developed.

So for eight years now, we’ve been struggling with the issue of water for use. For these years, we continue to buy gallons of water from people who come to sell to us. Those who can’t afford to buy just manage salty waters they’re able to find.”