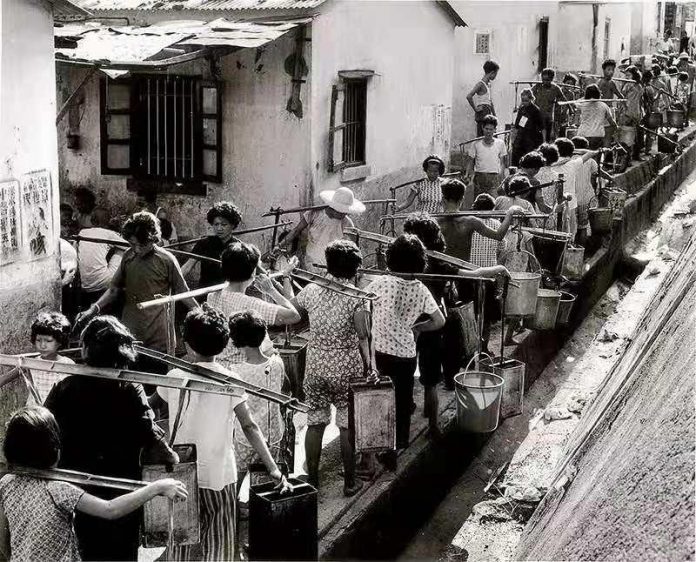 The Dongjiang-Shenzhen Water Supply Project, which stretches from Qiaotou township, Dongguan city, south China’s Guangdong province, all the way south to the Shenzhen Reservoir in Shenzhen city of the province, has greatly guaranteed a safe and stable supply of fresh water for the daily life and production of about 24 million residents in Dongguan, Shenzhen, as well as Hong Kong.

The project transfers water from Dongjiang River, which originates in east China’s Jiangxi province and flows to the Pearl River Delta in Guangdong, to the three cities.

The original main route of the project was 83 kilometers long and was then shortened to 68 kilometers after enclosed transformation in 2000.

Put into operation on March 1, 1965, the project had supplied Hong Kong with 26.7 billion cubic meters of water as of the end of last year.

Such a remarkable result wouldn’t have been realized without the efforts of tens of thousands of construction workers in the project. They have borne in mind their mission, toiled away during the construction, and selflessly devoted themselves to the project, contributing to safer water supply for Hong Kong.

Hong Kong is surrounded by the sea on three sides, and suffered from serious shortage of fresh water resources.

In 1963, Hong Kong was struck by a severe drought unseen in a century, and had to control water supply for residents. During the most difficult period, the region supplied water to residents once every four days and four hours each time. At that time, the life of several million Hong Kong people was in a plight.

After the Chinese General Chamber of Commerce (CGCC) in Hong Kong and the Hong Kong Federation of Trade Unions (HKFTU) asked the government of Guangdong province for help, Zhou Enlai, then Premier of China, approved a fiscal fund of 38 million yuan ($5.86 million) for the Dongjiang-Shenzhen Water Supply Project at the end of 1963, in a bid to draw the water of Dongjiang River to quench the thirst in Hong Kong.

To tackle Hong Kong’s water issues at the root, Guangdong came up with a bold idea of channeling the water of Dongjiang River from Qiaotou township through the riverway of the Shima River to the Shenzhen Reservoir, and eventually to Hong Kong via steel pipes.

The plan was in fact quite challenging, considering the technologies at that time. To use the riverway of the Shima River, which flows from the Danaoke Mountain in Shenzhen towards the opposite direction of that of the main route of the project, water levels at the upstream part of the project must be lifted by 46 meters, so that the diverted fresh water could then flow 86 kilometers to the Shenzhen Reservoir.

On Feb. 20, 1964, the water supply project kicked off. During the peak construction period, over 20,000 construction workers worked on the front line of the project.

As the construction advanced during the flood season, builders had to stay five to ten meters below the surface of the water for many foundation works, and sometimes were faced with inclement weather like rainstorms and typhoons.

On Oct. 13, 1964, a college student named Luo Jiaqiang lost his life when he persisted in his work at an over-seven-meter-high pier at a construction site in stormy weather.

Thanks to the unremitting efforts of builders, the project was completed within about one year, solving the problem of water scarcity for Hong Kong compatriots thoroughly.

The arrival of Dongjiang water has greatly pushed forward the development of Hong Kong.

Since China’s reform and opening-up in the late 1970s, the project has been expanded and upgraded for four times, increasing its annual water supply capacity to over 2.4 billion cubic meters from 68 million cubic meters in the first phase.

Within merely three years, over 7,000 constructors rebuilt a modern water supply passage which was known as the world’s largest water transfer project back then after overcoming a multitude of difficulties and challenges and achieving four firsts in the world. They made sure that more than 22,000 smaller projects of the transformation project are 100 percent qualified.

Since 1991, the provincial people’s congress and government of Guangdong have rolled out 13 laws, regulations and normative documents to ensure water quality for the project and its safe operation.

Thanks to such efforts, the water quality of Shenzhen Reservoir, the last stop of the water supply project, is above Grade II in the country’s five-tier surface water quality system all year round.

To satisfy the demand for water in building the Guangdong-Hong Kong-Macao Greater Bay Area and a pilot demonstration area of socialism with Chinese characteristics in Shenzhen in the new development stage, Guangdong decided to initiate the Pearl River Delta Water Resources Allocation Project with the approval of relevant authorities.

With a total investment of about 35.4 billion yuan, the project is designed to extend for 113 kilometers, and supply over 1.7 billion cubic meters of water every year.

Once completed after 60 months of construction as scheduled, it will divert water from Xijiang River, the longest river in southern China, to eastern Pearl River Delta, thus effectively solve the water scarcity in cities like Guangzhou, Shenzhen and Dongguan, providing emergency backup water source for Hong Kong, and guaranteeing water supply for the construction and development of the Greater Bay Area.

CPC has strong leadership and power to unite: member of Lebanese Communist Party