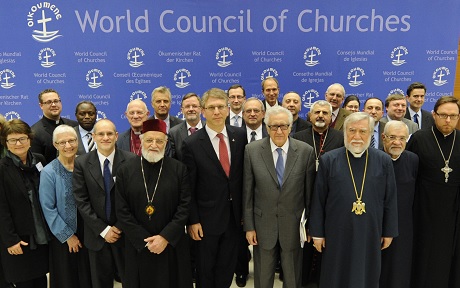 The heads of churches in the South Sudan Council of Churches (SSCC) in Addis Ababa have expressed gratitude to Ethiopia’s government, churches and its people for sheltering their South Sudanese neighbours fleeing conflict in their homeland.

“In a world where migrants are becoming increasingly unwelcome almost everywhere, Ethiopia shines out as a beacon of hope and of Gospel values, they noted citing the gospel of Matthew (25:35) “I was a stranger and you welcomed me.”

The leaders of the SSCC, an ecumenical body incorporating all the major Christian traditions in their country, said they had listed to their people in settlements who them of pain and bitterness that forced them out of South Sudan and of the life they are experiencing.

“People who grew up as refugees are again forced to become refugees once again.  Despite  the enormous  generosity of the Ethiopians  and  communities  that  host  them,  they  struggle  to  cope  up  with  the  new context  of refugee life. They have a huge trust in the government and the churches in Ethiopia.”

In their letter the asked how the Church can be a light  in the situation of suffering.

“God has entrusted us with this responsibility, to be the voice of these people,” they said in their message in which they said they had been reflecting “ever since the current senseless civil war began in South Sudan in December 2013.”

They said, “From  the very  beginning  we  have  urged  that  the  killing,  raping  and looting  must  stop;  we  recognize  that  there  are  legitimate  differences  between  various  parties, factions and communities,  but we insist that these be addressed through nonviolent  means and that the rule of law be respected.”

They noted that in June 2015 they had met in the Rwandan capital of Kigali and determined to implement an Action Plan  for Peace,  to  address  the root  causes  of the conflict,  using  the  three  pillars  of Advocacy, Neutral Forums (dialogue)  and Reconciliation.

“Now in 2017 we meet in Addis Ababa with the churches in Ethiopia, the World Council of Churches (WCC), All Africa Conference of Churches (AACC) and some of our ecumenical family to reflect on our visit to the refugee camps in Gambella.”

They recognize that the 2015 Agreement on the Resolution of the Conflict in  South Sudan (ARCSS), brokered by IGAD  has not brought peace  to their nation and that in July 2016  the conflict became worse, noting that the agreement  expires next  year with virtually  none of it implemented.

Noting the role of the Church in peacemaking they said, “We ask ourselves how we can move beyond this agreement.”

“We also urge our neighbours to use whatever influence they have to prevent the flow of yet more weapons into the conflict. We also respectfully request them to put aside their national interests and think only of the good of the ordinary people of South Sudan.”