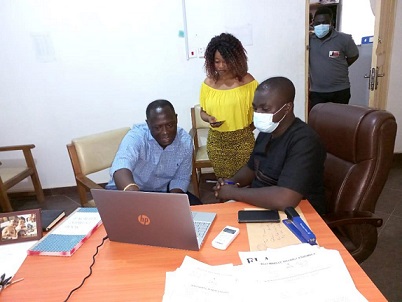 The Ellembelle District Director of Health Services, Dr Augustine Amoako has assured that despite the alarming reportage of HIV prevalence in the district, his outfit in collaboration with key stakeholders have made lots of progress in the fight against the disease.

Dr Amoako made this known when the MP for Ellembele Mr.Emmanuel Armah-Kofi Buah paid a courtesy call on him at his office in Nkroful.

He said key indicators of People Living with HIV (PLHIV), new infections of all ages, and Anti Retroviral Therapy coverage (ART) showed that Ellembele district was performing better than other districts in the Region and in some cases on top as a leader in the fight in the Western Region.

He said data also showed that Elembelle’s 80% ART rate( those identified and on treatment and, thus, pose less risks of further transmission) was the second highest in the Western Region with the Tarkwa/ Nsuem Metropolis being the top with 83%.

Dr Amoako lauded partners such as the MP’s Office and Hope for Future Generations, for their support.

The MP, Mr Buah thanked the Health Directorate and partners for their dedication and assured them of his continues support.

Mr Kofi Buah advised the people of Ellembele especially the youth to be mindful of the causes of HIV transmission.

He stressed the need for abstinence, use of protection and advised the public to avoid stigmatization of those living with the disease.

“ We must learn to be caring, compassionate and do everything possible to support individuals living with the disease”.

The MP also encouraged residents not to be afraid to get tested so that they could take advantage of available medications.