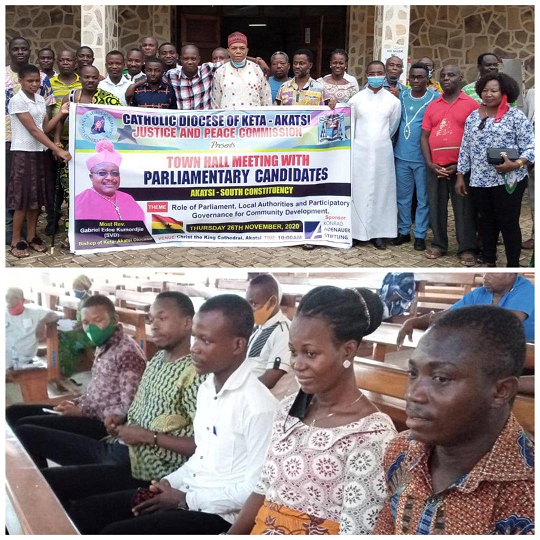 The Most Reverend Gabriel Edoh Kumordjie, Bishop of Keta-Akatsi Diocese of the Roman Catholic Church, has reiterated the need for citizens to be enlightened on the roles of members of Parliament (MPs) in national development.

He said citizens’ expectations from MPs in all aspects of community growth “was rather a disturbing one.”

The Most Rev. Kumordjie said the increasing expectations from MPs had a serious toll on their performance yet they were unable to stop it because of the effects on electoral fortunes.

“These include the provision of private goods in the form of favours, personal assistance, handouts to chiefs, business owners, local party activists and supporters,” he said.

In a speech read on his behalf, Rev. Kumordjie said there was a public misconception about the mandates of MPs and that not many constituents knew about their actual roles.

He said MPs were often seen as initiators of constituency and district level development projects, a role which was is not defined by law.

Rev Kumordjie said this at a town hall meeting organised by the Justice and Peace Commission of the Catholic Diocese of Keta-Akatsi in the Volta Region.

It was on the theme; “Role of Parliament, local authorities and participatory governance for community development”.

The meeting sought to provide a platform for the four parliamentary candidates in the Akatsi South Constituency and community members to deliberate on development issues of community concern, while addressing the misconception that development projects were the sole mandates of MPs.

The Most Reverend Kumordjie noted that MPs’ responsibilities was to represent, bring out the needs of their people through parliamentary debates, take part in legislation for the benefit of their constituents and lobby government for development projects in their various areas.

He said community engagements were critical to ensuring clear understanding of the mandates of parliamentarians and local authorities in the development agenda to create an integrated and inclusive discourse in the localities.

He advised all well-meaning Ghanaians to ensure peace before, during and after the upcoming general election.

Government agencies such as the National Commission for Civic Education, the Electoral Commission, and the Ghana Police Service gave brief presentations on the need for peaceful elections.

Reverend Vincent Adzika, the NCCE Director for Akatsi South, who spoke on Citizens Right and Responsibility during elections, said Ghanaians had every right to exercise their franchise.

Chief Superintendent of Police Joseph Atsu Dzineku, the Akatsi South Police Commander, said his outfit would not relent in arresting whoever may foment trouble during the elections.

Torgbui Akoto VII, chief of Akatsi Tatorme, who chaired the event, appealed to participants to serve as peace ambassadors.

Mr Stephen Abuku, Chairman for Akatsi Justice and Peace Committee of the RC Church, commended participants for pledging to peace.

Three out of the four Parliamentary aspirants present at the meeting; Mr Bernard Ahiafor, incumbent MP, Mr Sanusi Murana, National Democratic Party candidate, and Mr Atsah Nana Maxwell, the Convention People’s Party candidate, pledged their commitments to ensuring peace and stability before, during and after the elections.