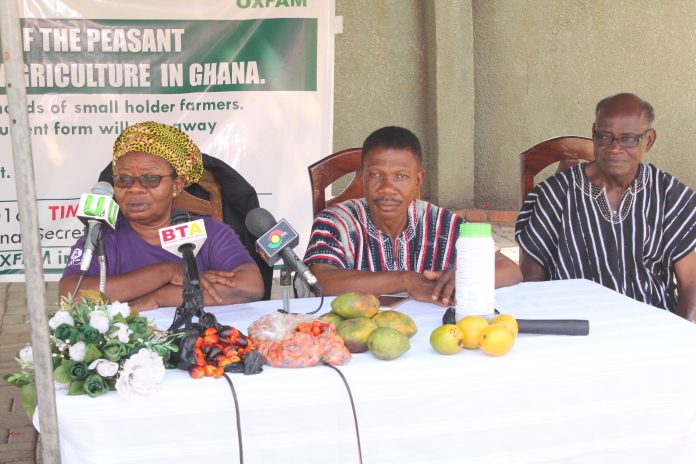 According to them, land grab by giant agribusiness for bio-fuel production and the forced ejection of farmers for estate housing and mining is noted as the leading cause of the poverty and the further marginalization of many small holder farmers in Ghana and in other parts of the world.

Victoria Adongo, Director of Programmes of the PFAG made these assertions at a press conference in Accra to mark the international day of solidarity with peasant farmers which fell on April 17.

20 years ago some 19 peasant men and women were murdered in El Dorados dos Carajas in Northern Brazil for defending their land against corporate interest, by government security forces.

Since then, on 17th April every year, peasants and rural folks all over the world hold numerous activities to observe this day as one of the darkest days in the struggle of small and landless farmers over right to seed, land and water.

The PFAG has also expressed outrage at the atrocious crimes committed by cattle herders popularly called “Fulani herdsmen”, in many farming communities across the country.

The farmers have blamed policy makers for the escalation of the problem due to their inability “to put in place appropriate policy that would lead to proper ranching and designated grazing lands for cattle,” they said.

The PFAG has also raised issues at the failure of the government to retrieve sums of monies lost to fraudulent financial institutions certified by the Bank of Ghana earlier this year. According to the PFAG, hundreds of farmers have lost millions of Ghana Cedi to unscrupulous micro-finance institutions, leading to the death of some of the farmers. They committed suicide.

GMOs do not increase yield and control pest

Mr Yaw Opoku, Director of Agriculture Sovereignty Ghana, revealed that proponents for the adoption of GM seeds into farming in Ghana confuse biotechnology with Genetic Modification.

According to him, whilst biotechnology constitutes a collection of methods that are used for product development involving biological organisms that are of economic benefit, GM biotechnologies and Bt varieties of crops on the other hand involve gene transfer across the normal borders imposed by sexual reproduction with dire consequences for farmers and the environment.

Mr Opoku adds that the widely publicized failure of Bt cotton in Bourkina Faso and the damage to farmers’ livelihoods has exposed the lie behind GM seeds that they increase yield and draw farmers out of poverty and misery.

He called on peasant farmers to reject the trial and commercialization of Bt Cowpea and rice in Ghana to avert a repeat of what has happened in Bourkina Faso.

Mr Opoku explained that following the genetic engineering of Cotton, Cowpea and Rice, the companies that produced these seeds have introduced an avalanche of legislation to supervise and to control the use of the seeds towards the maximization of profit.

He also revealed that giant agribusiness have begun the set up of commercial offices in Ghana to begin the trade of modified seeds to Ghanaian farmers and their counterparts in the sub-region.

According him the Plant Breeders Bill will make it illegal for farmers to continue the age old practice of saving and sharing seeds adding that the bill authorizes a plant breeder to destroy and prosecute all farmers on whose farms traces of Bt varieties of crops are found.

Yaw Opoku emphasized that the plant breeders bill in parliament will not benefit Ghana and her farmers, but will lead to a reckless and exorbitant increases in the price of seed and farm inputs and will carve away the real value of wages and salaries of farmers, increase the cost of agricultural production in all areas and contribute significantly to driving farmers out of farming.