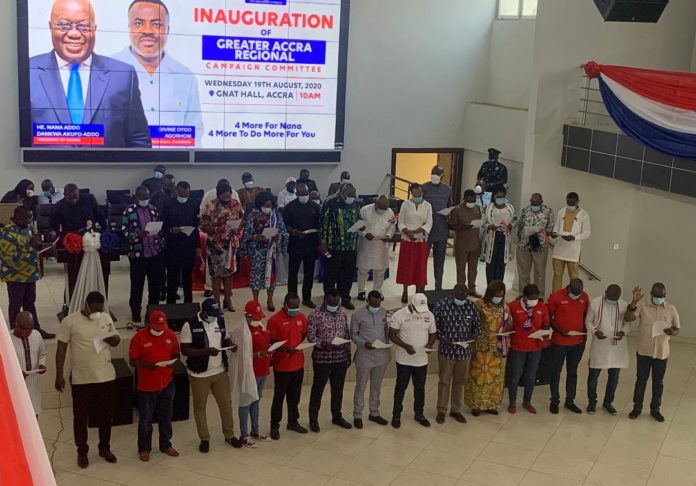 Mr Lord Commey, the Deputy National Campaign Director of the New Patriotic Party (NPP) has appealed to party members especially contestants who lost at the primaries to unite and campaign to retain power.

“We have an election to win and power to retain. The task is challenging, especially, those of us in Greater Accra, so we need to put our house in order, campaign vigorously by convincing the electorates of our success story as well as our planned programmes when given the mandate,” he said.

Mr Commey, made the appeal when he inaugurated two bodies namely; the Regional Advisory Committee and Regional Election Campaign Committee on Wednesday in Accra.

The theme for the campaign is, “Four more for Nana, four more to do more”.The five-member Advisory Committee include; Rev Professor Mike Oquaye, the Speaker of Parliament, Sheikh Ibrahim Cudjoe Quaye, a Former Member of Parliament (MP) of Ayawaso Central and Mr Stanley Nii Adjiri Blankson, a Former Mayor of Greater Accra and Madam Gladys Ashiety, a Former MP for Ledzokuku.

He said government had done so much work in the midst of challenges including; COVID-19 that needed to be propagated to electorate to win their votes.

“Let’s get out of the primaries’ mood, solve our differences and get to work. Chief Executives, Constituency Chairman, and Parliamentary Candidates must begin to work together because all of these people will form a campaign team at the constituency. NPP as a family of people who know how to set issues behind and rise to conquer,” he said.

Mr Commey urged the team to assign responsibilities and adopt a mixed approach including; door-door and social media to contain the spread of COVID-19 and commended the party supporters and officials for their hard work during the just-ended Registration Exercise.

Mr Divine Agorhom, Greater Accra Regional Chairman of the NPP said statistics from the Voter’s Registration had shown that it was the region with the highest voter population.

“As a swing region, it is a big responsibility for us to achieve our target of wining 24 parliamentary seats and also securing more than 53 per cent of the Presidential votes. We expect members to avail themselves for the task ahead and contribute to the victory the party is seeking,” he said.

He noted that NPP led government had a great vision and was implementing programmes such as One Village, One Dam – 1V1D, One District One Factory – 1D1F, One Constituency USD1 million One Year that would serve both present and future generation.

Mr Agorhom who is also the Regional Election Campaign Committee stressed the need for the constituencies, campaign teams, to reach out to more grassroot people to secure more votes.