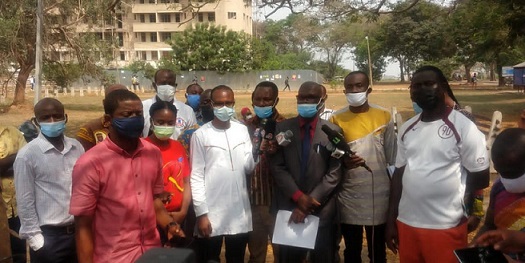 Mr Zakaria Mohammed, National Chairman, Senior Staff Association of Ghana-Universities of Ghana (SSA-UOG), on Thursday said the association has not received any order to call off its industrial strike action.

He said the Association heard about the orders in the media and that no letter was served on them, saying, “No summon was served to me or the association. We only heard it on social media and I cannot speak to it”.

The National Labour Commission (NLC) on Wednesday February 3, secured an interlocutory injunction from the High Court, Labour Division, against the SSA-UOG to call off its strike action immediately.

The Court ordered the parties to go back to the negotiation table to negotiate in good faith on the non-basic allowance and when the Tier 2 Pension arrears would be paid.

It has also given the parties three months to engage in the negotiations and report to the Commission.

The statement said the Court also asked the government to pay the pension outstanding arrears by the end of March 2021.

The Court orders were in the directives of the NLC meeting heard on Wednesday January 27, between the Fair Wages and Salaries Commission (FWSC) and SSA-UOG and the National Pension Authority Regulations.

The meeting was to address the issues of non-payment of tier 2 pension arrears of SSA-UOG, delay in the award of market premium and non-basic allowance and their condition of service.

Responding to the directives of the NLA on January 27, Mr Zakaria said the Association at an emergency National Executive Council (NEC) meeting on February 1 expressed disappointment in the government handling their issues.

He said the government through its agencies acted in bad faith by failing to comply with the NLC directives.

“Notwithstanding the commitment of NEC to engage the FWSC on their condition of service, it is our absolute resolve not to resume our official duties until the government has fully paid our outstanding tier 2 contributions within 48 hours”, he said.

“We expect government to act fairly towards the Senior Staff Cadre, by extending the interim market premium and non-basic allowance to all members of our Union without delay and serve a notice to members of the management of public universities who have resorted to intimidate our members to desist from such acts”, he said.

He said as much as the Association regretted the dire-consequences of the strike action, including the closure of basic schools and laboratories in all public universities, it remained resolute to obtain justice for the members.

“We wish to serve notice that we are unfazed by the threats to withhold our salaries. For the avoidance of doubt, we shall withdraw all essential services such as security, fire service and hospital staff if further attempts are made to withdraw our salaries”.