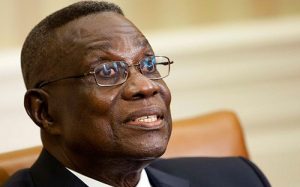 The running mate of the National Democratic Congress (NDC) in the 2020 general election, Professor Naana Jane Opoku-Agyemang, has tasked Ghanaians not to trade off the country’s enviable peace regardless of the petty internal misunderstandings.

Rather, it should put in place pragmatic measures to maintain the ‘haven of peace’ the late President of Ghana, Prof John Evans Atta Mills touted.

According to her, late Prof Mills had a strong sense of compassion, kindness and humility that earned him the title ‘Asomdwehen’ meaning ‘King of peace’ for his calm nature and quest for conducive atmosphere for all to peacefully co-exist.

As well, Prof Mills’ unmatched qualities of firmness and assertiveness attracted commendations from the international community culminating in many business partnerships with various organizations and countries.

Prof Opoku-Agyemang, was speaking at the Prof John Evans Atta Mills Memorial Heritage lecture to mark the 10th anniversary of his demise.

The series of lectures sought to celebrate Prof Mills as an academic and an intellectual and to immortalize his persona, his time on earth, and his legacy as one of Ghana’s most reputable Presidents by capitalizing on his outstanding ideals and values.

It was arranged by the Governing Board of the Prof Mills Memorial Heritage on the theme: “The Man John Evans Atta Mills – 10 years on”.

The programme assembled scores of dignitaries from the academia, traditional and religious leaders, students, and political stalwarts from the political divide in the Central and Western Regions and beyond.

Others are; Mr Samuel Atta Mills, a younger brother of the late President and the Member of Parliament (MP) for Komenda-Edina-Eguafo-Abirem Constituency and Mr Nii Lante Vanderpuye , MP Odododiodioo Constituency, among others.
Prof Opoku-Agyemang said Prof Mills bequeathed to Ghanaians both tangible and intangible deep-seated sense of tolerance, integrity, and respect for humanity.

Nevertheless, Prof Opoku-Agyemang bemoaned what she described as ‘deteriorating human values” of the Ghanaian, variously known as respect for dignity, integrity, generosity, cultural values, and rule of law.

She anchored on respect, tolerance and freedom of speech and rights to information.

Commenting on the recent past demonstrations by aggrieved law students, Prof Opoku- Agyemang, remarked, “…and I know if you were the current president of Ghana, students who demonstrated for being denied access to study law would not have been met with spray of hot water.”

Additionally, Prof Opoku-Agyemang indicated that Prof Mills would have allowed the demonstrators of occupy Ghana express their views on pertinent issues of the country.

She lamented on how a police officer was captured aiming a gun at peaceful demonstrators.
Dr Alex Segbefia, Board Chairman of the John Evan Atta Mills Memorial Heritage reminisced the days of Prof Mills as the President of Ghana.

According to Dr Segbefia the commemoration will set the pace for the moral compass of Atta-Mills to live long in the memories of the Ghanaian populace and effect the desired change in generations.

Dr Segbefia, said Prof Mills quest for ‘’Better Ghana” was operationalized in the ‘’The Agenda for Shared Growth and Accelerated Development for a Better Ghana” aimed at improving the standard of living of many Ghanaians.

“His countenance and achievements are worth emulating by all who hold Ghana and its noble ideals at heart and as such, service is the basis upon which the John Evans Atta Mills Memorial Heritage was established,” he added.