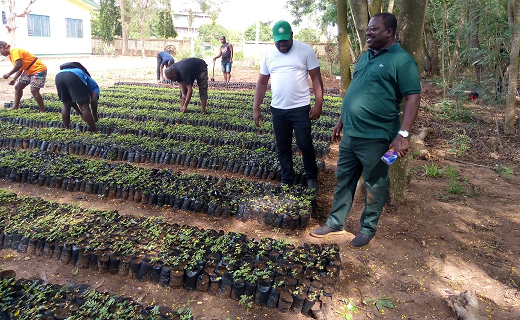 Mr Michael Kwakuga Fianu, Assistant District Manager of Sogakope-Denu Forest District of the Forestry Commission (FC) has encouraged organisations and individuals to freely visit the office for seedlings for the Green Ghana Project.

He said though June 11 was the official day for the tree planting exercise, there was stock and that the office would be open to supply freely to individuals and groups from the various political districts the office served.

Mr Fianu spoke to the Ghana News Agency (GNA), when his outfit led the Municipal Chief Executive (MCE) and Heads of Departments in Ketu South to plant mahogany seedlings at the premises of the Municipal Assembly, the Ketu Divisional Police Headquarters and the National Health Insurance office.

The Green Ghana Project, under the auspices of the Ministry of Lands and Natural Resources aimed at planting five million trees on June 11 across all 275 constituencies in the country to preserve and protect Ghana’s forest and vegetation cover for a balanced ecology.

The FC official said “the central nursery at Denu had about 147,000 seedlings for now” and that the office had distributed the only available cassia seedlings to Ketu South and North Municipalities, Akatsi South and North Districts, Keta and Anloga Districts and South, Central and North Tongu Districts to enable citizens to participate in the Presidential initiative.

“So far, we’ve distributed a total of 27,000 seedlings across the board and the stock at the nursery in the next two weeks will also be ready for out planting. I’m hoping that by the close of the month, we would have planted not less than 120,000 seedlings in all the political districts.

“I’ll encourage every individual in our area here to come out freely to the office and request for a seedling to plant.

He charged everyone to own the project, plant and nurture the plants to grow saying, only then would the Municipality be spared the harmful effects of climate change.

Though the GNA encountered a delegate of the Church of Pentecost at the Forestry Commission’s office at Tokor early morning for a supply of 400 cassia seedlings, some residents the Agency interacted with said they had no knowledge that such an exercise was taking place and called on the Assembly that in future, such important exercises should be publicised to engender public participation.