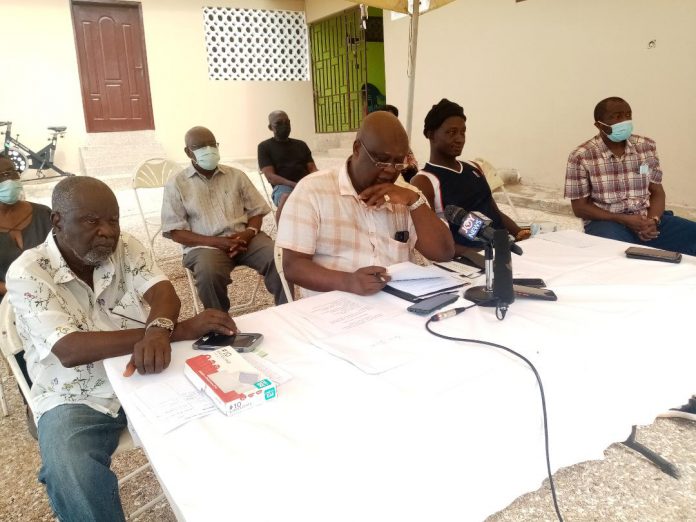 The McCarthy Hill Residents Association has protested against the siting of a cement factory in their area.

They said they would not sit aloof and allow the siting of a Cement factory that would be too hazardous to their health and well-being at McCarthy Hill, Tetegu, Mallam, Gbawe and Weija.

Mr Eddie Quaynor, the President of the McCarthy Hill Residents Association said this during a news conference to protest against the siting of the cement factory named ‘Empire Cement’-next to Pambros salt at South McCarthy Hill along the main road leading to Weija.

He said the dust from the cement whether it was crushed on site or brought in to be bagged on site would affect the lungs of residents, adding, “Many residents want to enjoy a peaceful and serene environment, free of constant cement dust particles in the air.

“The wind direction blows over the cement factory area in the direction of the catchment areas mentioned.”

Mr Quaynor said the Environmental Protection Agency (EPA) had confirmed in its’ correspondence to Empire Cement that edible salt and a cement factory do not mix and that the two land-uses were mutually exclusive and must be completely separated.

He said the Pambros salt was consumed in Ghana and served as a source of foreign exchange earner for Ghana as the salt was exported to many African countries and siting the cement next to Pambros salt was like destroying one precious industry conducive to the environment for another that is detrimental to human settlement.

Mr Quaynor said the Ownership of Empire Cement had Chinese ownership with a Ghanaian partner, Nana Obokomatta IX and that they keow what some Chinese were doing to the water bodies as a result of their galamsey operations.

He said many were not in the least concerned about the hazard the factory would cause to residents of McCarthy Hill and its environs.

He said the Factory owners had disregarded several warnings from the EPA to cease operations and instead were working day and night to speed up the construction of the factory and that they had installed three aluminum silos so far and were excavating and filling up the low-lying areas.

He said McCarthy Hill residents supported the one district, one factory concept and would welcome the creation of jobs in Ghana, and good initiatives for building factories according to well thought out land-use planning and law.

He added that Proper land-use planning would ensure that the health and safety of the residents were protected.

Mr Quaynor however, said the air pollution from the cement factory would blow and contaminate the regional hospital at the lower McCarthy Hill, and across Upper McCarthy Hill, Mallam, and the immediate environs.

He said their major concern was that the factory was being built even though there was no preliminary approval from (EPA) the statutory body in charge of assessing, granting approval, and monitoring such factories that impact the environment negatively.

Mr Quaynor said Cement factories by their nature were classified under heavy industry as it generated heavy duty air pollution that required siting in heavy industrial area, away from heavily populated or densely residential areas.

The President said the above production processes pointed to heavy industry which must be in a heavy industrial zone, away from the densely populated residential areas mentioned.

He said the Empire Cement owners had avoided any engagement with the residents about the health hazards on residents, especially children and the elderly and they were shocked to see the extent of construction that had occurred without their knowledge.

Mr Quaynor said the Cement particles which resulted from bagging 100 metric tons of cement per month, was a major environmental concern to the health of residents at McCarthy Hill and its environs.

He said they want the factory project to be terminated as soon as possible to curtail the monstrosity and related health dangers the factory posed to the community.