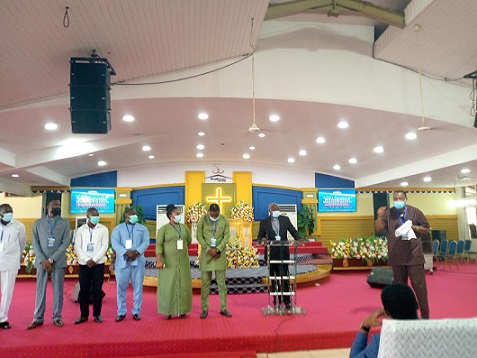 Reverend Paul Frimpong-Manso, President of the Ghana Pentecostal and Charismatic Council (GPCC) has said the Council will not tolerate any lifestyle that would bring the name of the Christian body into disrepute.

He said the Council would keep harmering and nforming the Ghanaian community that Lesbian Gay, Bisexual, Transgender, Queer and Intersex (LGBTQI) was “wrong, foreign, unnatural and ungodly”, and the society must frown upon it.

Rev. Frimpong-Manso added that the Council had proposed a legislation that prohibited the practice of homosexuality in the country, awaiting approval by Parliament.

“We have joined a Coalition to protest against this LGBTQI because we support proper human sexual ity, “he said.

He made the statement at the Council’s National Delagates Conference in Accra, to discuss the affairs of the Council and deliberate on effective ways to serve the Church, nation and society at large.

Addressing issues related to security in the country, he appealed to government to provide support, funds and the appropriate resources and gadgets to security agencies to enable them execute their roles effectively.

“The Police and other security agencies are doing their best, but it is not enough and so let us not chastise them, but rather encourage them to beef up their strategies in discharging their duties to make us feel more secure”, he said.

Rev Frimpong-Manso said the mandate of the Council was to reached out to those without the gospel, support the churches and also cooperate and support government in national development..

A total of 21 new applicants were presented and admitted on two years probation, and thirten members who had gone through monitoring for two year on probation with good standing orders by the council were confirmed as members.

Reverend Sam Korankye Ankrah, first Vice President of the Council, formally received the new members and charged them to be accountable, responsible and committed, adding that the Association would help and direct them on good Christian practices.

He charged Christians to live decent and moral lives in their communities draw men to Christ.

Apostle Eric Nyamekye, Chairman of the Church of Pentecost, and the second Vice President of GPCC, said doctrinal differences with other churches coming together under an umbrella, made it difficult to control members, but the Council was committed to encouraging and correcting members to help build a kingdom and not a denomination.

He added that the GPCC had the opportunity to meet with the regional statisticians to educate their members on the 2021 National Population and Housing Census and therefore charged the Christian fraternity to avail themselves to be counted.

Apostle Nyamekye encouraged Ghanaians to participate in the ongoing census and cooperate well with the enumerators who were spearheading the exercise with accurate data.

“When they come to your home, don’t drive them away, receive them and cooperate with them because this is an important exercise to the Christian kingdom to get the right number of the population, and also know places we can evangelize and build churches depending on the population”, he said.

In an interview with the Ghana News Agency, Bishop Stephen Owusu Jackson, Chairman of Christian Praise Interntional Center, (CPIC), who had been confirmed as a member of GPCC, said he was previleged to be part of a Christian body that had rules and principles and a voice that spoke on behalf of the Church.

GPCC is a faith-based Organization, and the umbrella with over 240 registered Pentecostal and Charismatic Christian church denominations and para-churches in Ghana, with 13 new members being confirmed to membership and 21 other churches put on probation.

The conference brought together National Executive Council Members of the Council across the country.