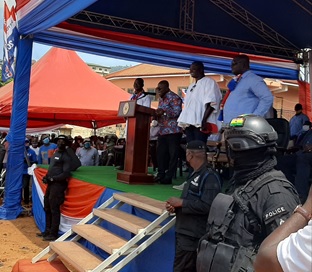 Mr Bryan Acheampong, Member of Parliament (MP) for Abetifi and the Minister of State in charge of Interior, has said that government would not tolerate any form of violence on the Election Day.

He said many Ghanaians were afraid to vote because of fear of violence and chaos and assured that government had resourced the security agencies to deal with any disgruntled elements who would foment trouble before, during and after the elections.

Mr Acheampong said this at Nkawkaw, at the beginning of a two-day tour of President Akufo-Addo to wrap up his campaign ahead of the December elections added “we have the men to protect Ghanaians before, during and after the elections so nobody should be afraid”.

President Akufo-Addo said he was contesting again on conviction of records and performance of his first term and appealed for votes to endorse his mandate for another four years of hard work and improvement in the lives of Ghanaians.

He expressed gratitude to the electorate in the Eastern region and across the country who voted for him in 2016 and said their votes on December 7, would confirm their appreciation for NPP’s hardowk.

Mr Kwabena Agyei Agyepong, former General Secretary of the NPP, who accompanied the President and his team said the NPP had proved to be better managers of the Ghanaian economy than any other party and that any change would be to the disadvantage of Ghanaians and called for massive votes on December 7, for the NPP.

Mr Eric Kwakye Darfuor, Eastern Regional Minister and MP for Nkawkaw urged the people to vote for the NPP both Presidential and Parliamentary and added “vote massively for President Akufo-Addo and Mr Joseph Frimpong, the parliamentary Candidate for Nkawkaw, whom I have handed the baton to, so together they can work and bring more development to Nkawkaw and its environs.”

Religion must be a springboard for national coexistence – MP