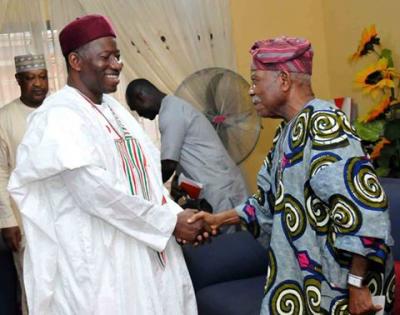 ?Restructuring is what will let us out of jail and allow us to develop at our own pace. The man who will do it is the one we are supporting, not the man who will kill it?.
With those words, the pan-Yoruba socio-political group, Afenifere, has en?dorsed the re-election bid of President Goodluck Jon?athan.
The group?s leader, Chief Reuben Fasoranti, hosted President Jonathan to a private meeting on Tues?day evening after which the formal endorsement was announced.
Earlier in the day, the Af?enifere had met at Fasoran?ti?s Akure, Ondo State home, where it announced support for ?the party that would implement the deci?sions of the National Con?ference.?
The conference, which was organized last year by the Jonathan administra?tion, was strongly opposed by the leaders of the main opposition party, the All Progressives Congress (APC).
The convocation of a national conference where the problems of Nigeria would be tackled at the fun?damental level had for ages been a major demand of the Afenifere, particularly after the annulment of the June 12, 1993 presidential election.
The spokesman of the APC presidential cam?paign, Alhaji Garba Shehu, in an interview with the Daily Times faulted the de?cision of the Afenifere.
He queried: ?What gave the Afenifere leaders the impression that an APC government will not imple?ment the decisions of the conference? How did they arrive at the conclusion that the APC will not imple?ment the decisions reached by that congregation of Ni?geria?s eminent thinkers??
President Jonathan held a closed-door meeting with leaders of the Afenifere ahead of Wednesday?s cam?paign rally in the state.
The President, in com?pany of top national lead?ers of the Peoples Demo?cratic Party (PDP), arrived at the compound of Chief Fasoranti at about 7: 30 pm. Also with him was the Ondo State Governor, Dr. Olusegun Mimiko.
When the meeting ended, the Presidenttold journal?ists that the entourage only came to pay a courtesy visit to the Afenifere leaders.
?We came to pay respect to our leaders who are the leaders of the Afenifere and we had a fruitful dis?cussion?, he said.
Speaking further on behalf of the President, Mimiko who is also the southwest campaign co?ordinator of the PDP, said that the Afenifere group had ?unequivocally en?dorsed? President Jonathan as the next president of the country.
He said: ?What Afenifere has done today is unequivo?cal endorsement of Presi?dent Goodluck Jonathan and for the records, let me also say that President Jonathan will be the first President that Afenifere will visit in office.
?They paid a courtesy call on him sometime in 2013 and they endorsed him. Afenifere, by tradi?tion, by antecedent and his?tory of this country, is per?haps the most principled and most committed socio-political group in Nigeria.
?In their endorsement, they particularly noticed that the transformation agenda of Mr. president is not a fluke; that it is sys?tematic, consistent and they think that it is the root for the transformation of Nigeria. Importantly, they also noticed that Mr. presi?dent had the courage to convoke the National Con?fab and for them especially in terms of restructuring, that is where Nigerians should be headed and they believed that if he?s reelect?ed he would be able to carry it through?, Mimiko said.
Also, the publicity sec?retary of the Afenifere Re?newal Group (AGR), Mr. Yinka Odunmakin who ad?dressed journalists said the group supports the presi?dent Jonathan?s as long as he would implement the report of the National Con?ference.
?It is a courtesy visit on the leadership of the Af?enifere and the leader in his speech made it very clear that the president, having convoked his own National Conference in 2014 which has set Nigeria on the path of autonomy through fed?eralism; that, for as long as he stands on the outcome of that report, he has the support of Afenifere. Full endorsement? Odunmakin said.
When asked about the response of President Jona?than to the group?s endorse?ment, Odumakin said: ?He (Jonathan) made it very clear that Afenifere was an important pillar in the pushing for a National Con?ference and that initially he was a skeptical about the conference. But he said the group must be thanked because being a southwest mouthpiece they (Afenife?re) were very instrumental to the success of the confer?ence. He further explained that he was committed to implementing the report but the reason he is taking his time is that some issues in the report are being po?liticized but the report will be implemented within 12 months?, he added.
The National Chairman of the Social Democratic Party (SDP) and an Afenife?re leader, Chief Olu Falae said:
?What is most crucial for the Yoruba race is the re?structuring of Nigeria and since the president is al?ready doing the restructur?ing, convoking the National Conference and starting to implement the programme, Afenifere supports him so that he can complete the implementation. That is the purpose of his visit.?
Falae added: ?Restructur?ing is what will let us out of jail and allow us to develop at our own. The man who will do it is the one we are supporting, not the man who will kill it?.
Meanwhile, President Goodluck Jonathan is expected to address sup?porters of the party today (Wednesday) at the Democ?racy Park in Akure while a public holiday has been de?clared in the state for civil servants.
Earlier in the day, the Af?enifere had called on Nige?rians to vote for a presiden?tial candidate that would implement the outcome and report of the 2014 Na?tional conference.
In a communique read to journalists by Odunma?kin after an emergency meeting held in Akure, the group said that Nigeria might be put in the reverse gear if the report of the Na?tional conference was not implemented.
It urged Nigerians to vote for a presidential candidate who is committed to faith?fully implementing the re?port of the 2014 National conference.
Pa Fasoranti, Chief Fa?lae, Chief Sehinde Arog?bofa, Pa Ayo Adebanjo, Chief Supo Sonibare and Chief Iyiola Omisore, were among the dignitaries at the meeting.