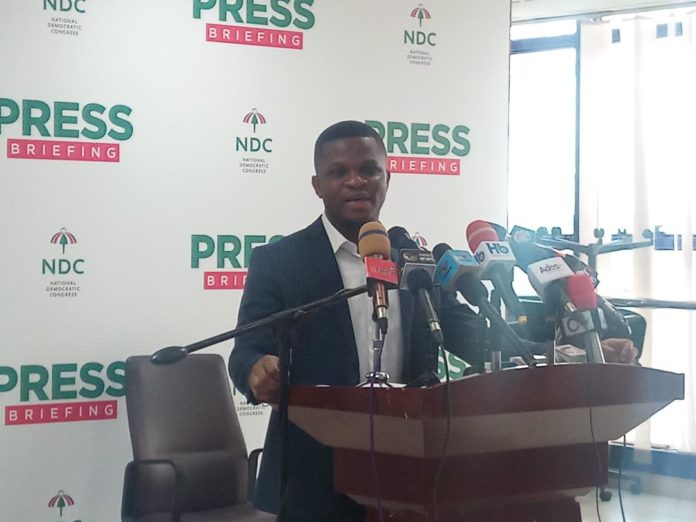 The next National Democratic Congress (NDC) government will decentralise and convert the Labour Office into the National Employment Bureau, equipped with state-of-the-art facilities and grant tax-waivers to employers who engage workers through the Bureau.

“As a first step soon after we are ushered into office, we shall pass the first of its kind in our nation’s history, an Employment Act to provide a comprehensive framework for job creation and labour market statistics,” Mr Sammy Gyamfi, the National Communications Officer of NDC, said on Wednesday in Accra, at the Party’s weekly meet the press programme.

He said given Ghana’s small market size of only 31 million people and a per capita income of $2,200, the next NDC administration intended to embark on an aggressive promotion of exports, which would lead to a high demand for labour to meet increased production for both domestic consumption and export.

Mr Gyamfi noted that to accommodate the anticipated demand for Ghanaian goods and services, the NDC government would create a three-shift economy, especially in manufacturing and other high-end services, which would operate 24 hours.

“Thus, the additional two shifts will be a source of additional employment. Companies that currently operate 24 hours with only two shifts of 12 hours each in violation of the labour law (which

specifies a maximum of 8 hours), will be required to run three shifts and, thus, create a third stream of jobs.”

He said the goal of the NDC/Mahama government was to create shared prosperity for all and not a select few, by creating enough sustainable jobs that paid well enough to avoid the problem of “working poor”, where workers’ wages were so low that they could not meet the basic necessities of life and remained poor even though they were working.

“We are committed to the creation of sustainable jobs for the Ghanaian people because we are fully aware that the youth and people of this country deserve decent employment to be able to afford a decent living for themselves and their families,” Mr Gyamfi said.

He said that was what informed the theme of the Peoples’ manifesto: “Jobs and Prosperity for All”, and said the vision for jobs, dubbed: “Edwumapa”, was a solemn pledge that would focus on creating “One Million Permanent Jobs with Decent Wages in Four Years.”

Mr Gyamfi noted that to achieve that, the next NDC/Mahama government would create a minimum of 250,000 sustainable jobs with decent wages every year over the next four years.

That, he said would translate into “a total of a minimum of one million sustainable permanent jobs and not ad hoc jobs in four years,” adding, that the NDC’s agenda for jobs would be science-driven while embracing

critical reforms to create job opportunities that hitherto did not exist. GNA