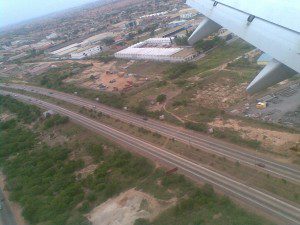 Mr Kwasi Amoako-Attah, the Minister of Roads and Highways, has opened the Lakplakpa River Bridge on the Accra-Tema Motorway to traffic, with an assurance of its safety from collapsing and threatening life and property.

“We will not risk the life of any Ghanaian. See the heavy truck there, it is strategically placed there from the National Road Safety Authority and will pass over the bridge to give assurance to other vehicles that the repairs were well done, and has been tested and testified by competent engineers,” he said.

The Minister, who made the comment after opening the bridge to traffic at the early hours of Friday, said the development was only a fulfillment of an assurance given to the public and users of the motorway to safeguard their lives.

On Tuesday June 7, 2022 the Minister together with the Ghana Highways Authority, diverted motorists playing the Accra-Tema Motorway onto alternative routes – the Fertilizer Road, Tsui Bleoo Road, Spintex Road 1, Teshie Link, Adogon Highway and Burma Camp Roads 1 & 2, after observing the defects developed by some sections of the deck slabs under the bridge that needed replacement.

The Minister then gave the assurance to ensure that damaged sections were cut and reconstructed through placing of props to hold the bridge structure together.

The bridge was then going to be replaced with a reinforced concrete slab, and opened to traffic at the 06:00 hours of Friday June 19, 2022.

Mr Amoako-Attah expressed satisfaction over the fulfillment of promise after assuring the public that the problem was not “insurmountable”.

“We are glad that the bridge is fixed and the road is reinstated beyond the imagination of the people,” he said.

He lauded the Engineers who worked on the project and the Ghana Police Service for its hard work to ensure that the
step was successful.

“The problem coincided with heavy rainfall but despite that the engineers worked, and lived up to expectation and whether rain or shine they were here.

“For the Police, their work has been fantastic. They have kept faith with us and they even mounted operational tent here for the past four-five days. Chief Superintendent Asante was here almost every day with his men in the rain and Chief Superintendent Atanga of Airport Police Station was also here, as well as the Regional Command of MTTD all facilitated by the IGP COP Dr George Akuffo Dampare,” he said.

The Minister also thanked the public and all motorists for the patience exhibited while going through difficulties and inconveniences for the bridge to be constructed.

Mr Amoako-Attah commended the National Road Safety Authority for being a cooperative partner and contributing significantly towards the successful completion of the project.