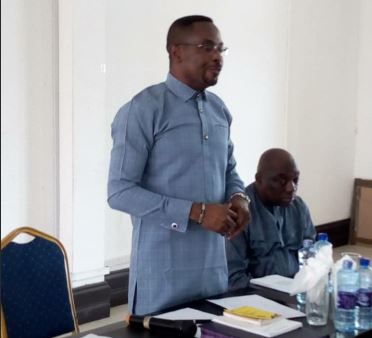 Mr Kwamena Duncan, the Central Regional Minister has asked Metropolitan, Municipal and District Chief Executives (MMDCEs) to remain focused in achieving the developmental targets outlined in their performance contract for the benefit of the citizens.

He noted that with 2020 being an election year, there was high possibility for some MMDCEs to abandon their duties and shift efforts towards campaigning, but cautioned that would not be countenanced by the RCC should they under-perform.

The Regional Minister gave the warning at the signing ceremony of the 2020 Performance Contract between MMDCES and MMDCDs in the Central Region on Monday.

“With the year 2020 being an election year, I know you will be busy with campaigns, but that should not be an excuse not to perform your duties. If one’s work is plentiful, he sees to all of them and that makes a great leader”, Mr Duncan said.

The contract was signed in accordance with the implementation of the Local Government Service Performance Management System to improve service delivery in the Metropolitan, Municipal and District Assemblies (MMDAs) and also to ensure the success of certain specific projects at the assemblies.

Mr Duncan urged the MMDCEs and MMDCDs not to treat the signing of the contract as a mere annual routine exercise, but commit enough time and resources to achieve the targets.

“Do not attend to this with the usual character, let your hard work reflect eventually, when results are published, be committed and see it as service to God and man”, he stressed.

He said the contract would go a long way to improve transparency and accountability at the local level.

Mr Duncan noted that for past years, limited resources were the excuse for failure at the district level, but urged the MMDCEs to prioritise and make the best of the available resources to achieve the desired results.

On behalf of the MMDCEs, Mr Nicholas Kofi Baako, MCE for Assin Fosu and Dean of the MMDCE’s indicated that the performance contract had helped to achieve developmental goals and kept staff of the MMDAs on their toes.

He added that the targets outlined in the contract were achievable and entreated all to give their utmost best as non-performance affected respective districts and ultimately stalled national development.

Mrs Justina Marigold Assan, MCE of Agona West, the best performing district in 2018 said the feat was achieved by dint of handwork and determination with the building of capacities in various sectors.

She urged her colleague MMDCEs to work tirelessly to achieve success, describing the performance contract as both a challenge and an inspiration for better performance.