The United States announced today that it has seized three websites used by sanctions-violators to trade in crude oil, according to an official press release.

The websites were, according to the U.S. government, used by Iran to trade oil with Venezuela—two sanctioned countries that are not allowed to trade oil at all, let alone with each other.

The virtual seizure comes shortly after the physical seizure of tankers that the U.S. DOJ says were carrying oil products to Venezuela in violation of sanctions. That seizure involved over a million barrels of fuel that are now being held by the United States.

The three websites seized were that of Mobin International, Sohar Fuel, and Oman Fuel—“front companies” of Mohammad Madanipour–which the DOJ said had facilitated a fuel shipment from Iran’s Islamic Revolutionary Guard Corps to Venezuela. 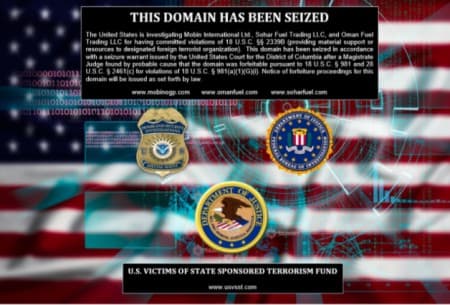 The United States has been trying to cut off crude oil shipments from Venezuela and Iran, but Iran is still successfully exporting some oil—as many as 600,000 barrels daily, using ship-to-ship transfers at sea, with transponders turned off.  Most of Iran’s oil makes its way to China one way or another—if not directly, then indirectly.

Venezuela is managing to export 325,000 barrels daily, although this is mainly in the form of diesel-for-crude swaps, which are not in violation of the U.S. sanctions. Venezuela is grappling with a critical fuel shortage as its refining industry has been almost completely halted. Venezuela’s state-run oil company, PDVSA, has managed to start an additional refinery or two in recent weeks but has had little luck with keeping them operational for any meaningful length of time.