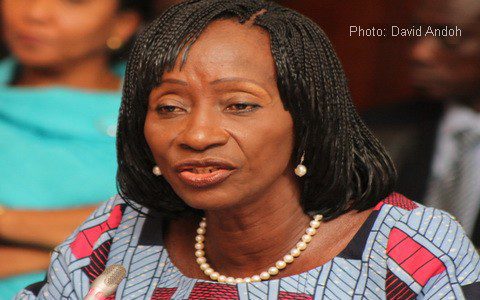 The Chief Executive Officer (CEO) of the Komfo Anokye Teaching Hospital (KATH), Professor Ohene Adjei, has been asked to take all his accumulated leave with immediate effect.

The decision followed investigations conducted into the alleged missing of five stillborn babies at the hospital early in February this year.

The Minister of Health, Ms Sherry Ayittey, gave the directive at a press conference in Accra Tuesday to announce the findings of the investigations which the Ministry of Health (MoH) had directed the Nursing and Midwifery Council (NMC), the Medical and Dental Council (MDC) and the management of KATH to conduct within a period of two weeks.

The minister also directed the board of the hospital to appoint a senior person in management to occupy the position of CEO. Ms Ayittey gave the MDC and NMC up to April 15, 2014 to submit their final report and recommendations on the incident.

Continue leave
The midwife and doctor on duty who had been asked to go on an indefinite leave were also asked by the ministry to continue their leave till the final reports by the NMC and MDC on April 15, 2014.

Ministry to meet Madam Suwaiba
Meanwhile, Ms Ayittey noted that the MoH was facilitating a meeting with Madam Suwaiba, whose missing stillborn baby sparked the saga, and her family to find an amicable solution to the incident.

Procedural lapses
After analysing the various reports submitted, Ms Ayittey said only two bodies of five stillborn babies were sent to the mortuary, while the other three were sent to the incinerator, violating the laid down procedure of transferring dead babies to the morgue.

She said the reports indicated that the dead babies had been put with other waste and cleaning materials in a room which was not properly secured.

Furthermore, she said the investigations indicated that there was no certification of stillbirth by a doctor and no evidence of register that the stillborn babies were discharged to the mortuary attendant.

?The stillborn babies should have been handed over to the mortuary attendant and registered but there was no evidence to that effect,? she stated.

She, therefore, urged the board of the hospital to improve on the environmental conditions of the labour ward to enhance maternal and child care.

Reports
Explaining the findings further, the minister said there was an inappropriate storage facility for stillborn babies at the labour ward, while the handing over of stillborn babies was done through documentation rather than physical inspection.

Touching on Madam Suwaiba?s incident, Ms Ayittey said the care given to her (Suwaiba) was poor, saying the midwives who had admitted Madam Suwaiba at the labour ward had not conferred with their colleagues at the Ante-Natal Ward on the issue of the absence of a foetal heart rate which they (midwives at labour ward) had realised upon admitting her.

Again, Madam Suwaiba lost about 400mls of blood, yet Ms Ayittey said Suwaiba was made to walk to the lift that had taken her to the lying in ward, instead of being transported on a trolley or in a wheelchair.
Sourec-XYZ