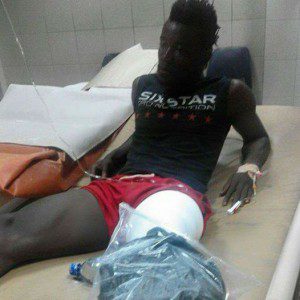 The injury of Asante Kotoko midfielder Jackson Owusu came as a big blow to many Ghanaian players who have responded in diverse ways on social media.

The Asante Kotoko workaholic midfielder broke his leg with six days to the start of the season when playing an unofficial game at home with his friends dubbed ‘Sunday Special’.

The players has successfully gone through operation is is expected to make a comeback after the season.

Some of the players sent get-well messages to the injured Jackson Owusu on twitter and facebook while others described how shocking the news came to them.

Below are some of the comments:

I felt very bad when I heard Jackson Owusu has broken his leg. But whatever happens, we should give thanks to God. Motto we all wish you a speedy recovery. Stay bless

Boy get well soon. Everything is in God’s hand because HE knows the best. Am 100% sure your leg will be healed, you will come back to the field and become a super star in Ghana football. So don’t listen to what people are saying and think of when to come back and also keep praying to God. Satan will be ashamed. God bless you in his name AMEN

Jackson I know you have a good heart and you don’t talk too much so God will make you come back stronger than before. Have faith. Am with you in prayers…. Ya Rabb, Alhamdulillah to everything in life.

Jackson Owusu is a very dear friend of mine and I am very sure he’s going to have a speedy recovery and bounce back very quickly.

It’s sad when players get such injuries. Jackson don’t worry, you will be well again and even stronger.

I’m sad for him. The way motor is playing now it just unfortunate he got that injury may the Lord help him to recover quickly

It’s sad to have a hardworking player like Jackson injured when the league is just about starting. I am sure Jackson himself is hurt because he will not be playing in the league. I wish him speedy recovery and am sure he will come stronger.