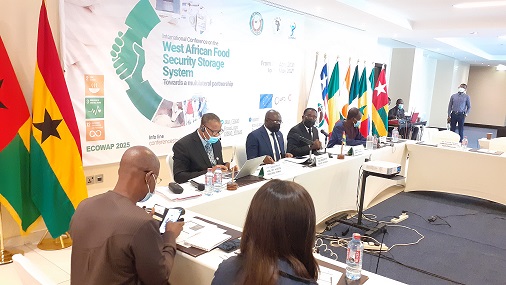 The Ministers in charge of Agriculture and Food Security of ECOWAS Member States have resolved to work towards adequate food reserves at the local, national and regional levels to ensure food security in the subregion.

They noted that strategic food reserves are powerful instruments of resilience for grassroots communities, states and ECOWAS and contribute to the dignity and food sovereignty of the people of the Sahel and West Africa.

Dr Owusu Afriyie Akoto, Ghana’s Minister of Food and Agriculture, expressed their commitment, on Monday, at the closing ceremony of an international conference, which opened on Wednesday, April 28.

The conference created the platform for the sharing with partners and other Sub regions, the experiences of the ECOWAS’ food security storage system.

The Ministers stated that more than 27 million people still faced with a difficult food situation for despite the region’s efforts to develop agriculture and the progress made towards achieving the goals of eliminating hunger and malnutrition.

The region has more than 400 million citizens.

The situation, the Ministers said, was largely linked to natural disasters, drought, locust invasions, army worm and the various security crises in the Region.

This had been aggravated by the COVID-19 pandemic, which reduced the food supply channels in the various markets of Member States.

Dr Akoto, who is also the Chairman of the ECOWAS Specialised Ministerial Technical Committee, said it was important to invest in storage infrastructure, logistics, food processing and nutritional food production capacity development.

They thus agreed to build and increase a national food security stock and continue the principle of “grain for grain” reimbursement from the regional stock to ensure its sustainability.

They would also promote trade between food deficit countries and food surplus countries in accordance with the principle of free movement of goods within the ECOWAS.

Dr Akoto said the Ministers had also renewed their commitment to allocate five per cent of their national stock through the Network of Companies in charge of the Management of National Food Security Stocks in the Sahel and West Africa in solidarity with Member States affected by severe food crises.

They encouraged the Humanitarian and Development Agencies of the United Nations System and Development Aid NGOs to prioritise local purchases of food staples as part of their support in order to build the resilience of local agri-food systems.

Mr Sekou Sangare, ECOWAS Commissioner for Agriculture, Environment and Water Resources, lauded Dr Akoto for his achievements in the area of food security in Ghana.

He called for the strengthening of the decision-making and information system to improve national agricultural production to limit or avoid the dependence on the international market.