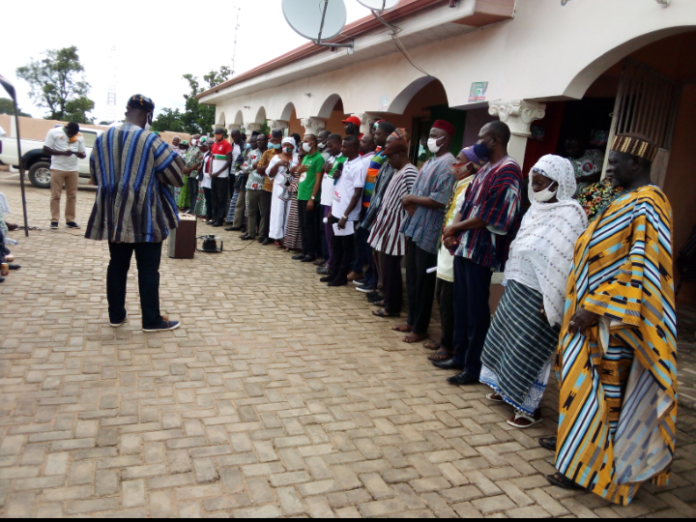 At a short ceremony held at Sawla to outdoor the constituency campaign team,the constituency chairman and leader of the team,Alhaji Salia Osman, affirmed the readiness of the entire team to work tirelessly towards rescuing Ghana from the incompetent hands of president Akuffo-Addo.

According to him, history was about to be made, expressing delight in the fact that the ‘rescue mission’ just begun in earnest in the Sawla-Tuna-Kalba constituency with the inauguration of the campaign team.

The track record of the NDC in the constituency he noted, far outweighs the NPP, adding that the NPP has no single record in terms of development in the Sawla-Tuna-Kalba constituency.

He used the occasion to call on the rank and file of the party to unite towards consolidating the gains of the party, whilst noting that, Sawla-Tuna-Kalba constituency was the first constituency in the Savannah Region to outdoor its campaign team.

In administrating the oath,the Regional Scribe encouraged members of the team to work tirelessly towards returning H.E John Dramani Mahama to power,whilst retaining the parliamentary candidate of the party for a prosperous Ghana.

He disclosed that the NDC as a party was on a rescue mission towards salvaging Ghana from the clueless hands of family and friends Akuffo-Addo government.

According to him, a man on a rescue mission does not retreat nor surrender until the final victory is delivered,admonishing members of the team to hold the fort and return Ghana back to the path of decent democracy and development.

He said the details of the task the campaign team will be executing was to be disclosed to them at a close door meeting.

The Regional Chairman of the party,Alhaji Imoro Seidu cautioned the Jean Mensah led Electoral Commission against any attempt to manipulate the outcome of the polls in the Savannah Region.

He said together with his regional executives,any attempt to foil the outcome of the elections in the Savannah Region will be resisted with all the might and strength.

In his subtle observation,the fast tumbling elephant party led by president Nana Addo Danquah Akuffo-Addo has already lost power and now on a diabolic mission to rig the elections.

He encouraged members of the party to remain steadfast as the future of Ghana and Savannah Region remain bright with the NDC.

The Regional Elections Director of the party,Hajia Fati Forgo said the future of NDC belongs to woman,noting that NDC has always given special recognition to women.

She disclosed that the appointment of professor Jean Nana Opoku Agyemang as running made to former president John Dramani Mahama gives refreshing hope to all women in the party.

Hajia Fati called on all women activists of the party to get out there and sell the message of hope of the party as contained in the People’s Manifesto to the voter.

He said the legacy of H.E John Dramani Mahama is visible enough for all to see, urging members of the party to remain united and join in the rescue mission.

Kongwura Adamu Seidu Jinkurige I,who also sent words revealed that Ghana is currently in wrong hands,admonishing members of the party to eschew the past and unite for the victory ahead.
He said the return of H.E John Dramani Mahama is the only solution to the many challenges and mismanagement of the economy by the current administration.

He said the family and friends Akuffo-Addo government has not executed any single project in the constituency aside plagiarising projects started by former president John Dramani Mahama.

He dared the NPP in the constituency led by the DCE to a debate with the party’s communication team basically on development projects.

His colleague Member of Parliament (MP) for Salaga North constituency,hon. Alhassan Mumuni called on the people Sawla-Tuna-Kalba constituency to rally behind the Member of parliament and presidential candidate of the party.

He described the member of parliament as a very hardworking and results oriented legislator who can take the constituency to the next level.

Present also were constituency and regional executives of the party, chiefs, a section of party members and the media.