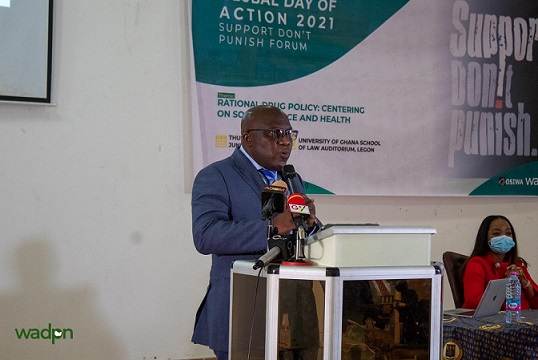 The Annual Lectures will be held on April 8, the birthday of the late former United Nations Secretary General.

The Day is also observed globally as the Global Day of Action -Support Don’t Punish, a global advocacy campaign.

He said experts in drug policy in the country and across the globe will be brought together to discuss important topics around drug policies that advance social justice and human rights.

He said they believed that it was important to continue to amplify and strengthen a diverse global movement to repair the harms caused by drug policies that were not evidenced by science.

He said this was not rooted and informed by social justice, public health and socio-economic and political human rights.

Mr Akrasi-Sarpong described the late Kofi Annan as a person, who believed that it was time to end drug policies, whose rationale was punishment.

He said it was true that the sustainable wellbeing, peace and development of Africa generally and West Africa in particular was a personal passion and agenda for the late Kofi Annan.

Mr Akrasi-Sarpong said yet he took the bull by the horns and started it nevertheless, which had today opened up debate and created real policy change.

He said the late Annan believed that it was important to challenge the status quo and find more evidence-based strategies that would benefit the people of his roots, so he convened the West Africa Commission on Drugs.

Mr Akrasi-Sarpong said the initiative of late Ghanaian UN Chief had indeed led to a lot of significant progress in the Region, especially building voices within civil society, who have been championing the discourse and driving the work.

Dr. Mary Eyram Ashinyo, Public Health Physician, said as the country moved towards the 2030 agenda with the slogan ‘leave no one behind’ policymakers must ensure that means leaving no individual, who uses drugs, nor any affected community behind.

She said drug use took place across all continents, ages, social classes and genders, however, repressive drug policies and the lack of access to health and social services (including harm reduction and treatment, and also general health care) generally affected the poorest, most marginalised segments of society.

The Public Health Physician said criminalising people, who use drugs merely increased stigma and marginalisation, acting as a barrier to education, employment, health and social services,

She said it was time to make special efforts to provide public services and give some support to drug users and communities which had been harmed by the so-called war on drugs.

“It is time to rethink the overall goals of drug policies to ensure that they are aligned with the Sustainable Development Agenda,” she said.

She said the government must Shift the focus away from objectives that only look at market elimination of drugs, and towards a reduction of the drug and drug policy related harm.

Dr Ashinyo said there should be increased interest and involvement of legislators, key actors like developmental partners in these efforts and importantly, civil society actors in the discourse on drug policy.

“We also need to rethink the way in which development connects with drug policy; moving from alternative development to sustainable development,” she added.

Mr Seth Kwame Acheampong, the Eastern Regional Minister, said Ghana had not legalise Cannabis but rather was in the process of managing a regulated Cannabis regime.

Speaking on the new Narcotics Control Commission Act, 2020, the Minister said the Act had introduced some issues like public health, which was the harm reduction and the commercial beat.

He expressed the hope that the new enactment would serve as a catalyst for all stakeholders interested in the area of drug prevention, adding that it has also enhanced the scope of the Narcotic Control Board to become a Commission.

He said the war on drugs had four pillars, which are supply, demand, harm reduction and alternative livelihoods, which were all captured in the Act.