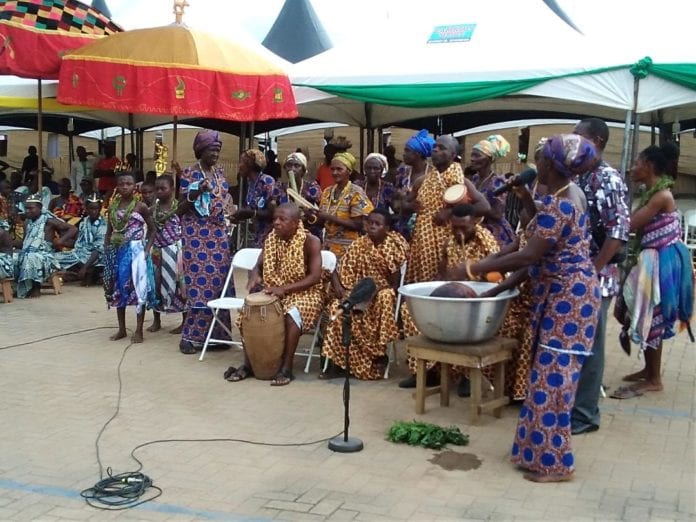 The Western and Northern Regions showcased impressive traditional dances when they had their day at the ongoing National Festival of Arts and Culture (NAFAC) in Koforidua.

The NAFAC under the auspices of the Ministry of Tourism, Culture and Creative Arts and the National Commission on Culture (NCC), has been planned to feature all the 16 Regions by showcasing their culture on each day throughout the weeklong festival.

Both Regions gave brief presentations of their cultural heritage, rich resources and tourism sites and performed various traditional dances that made them unique to the admiration of Chiefs and people from their respective areas, Ministers of State and the general public.

The Yemgri -Naa Traditional Group, the Konkomba group and the Nkabom Cultural group from the Northern and Western Regions respectively thrilled the audience.

Mrs Gifty Kusi, Deputy Western Regional Minister, said the Western Region was endowed with rich natural resources and heritage sites indicating that the Region was home to historical relics including five light houses and several forts and the oil producing region in Ghana.

She said just like her Region, every part of the country had a culture that made Ghana a unique country and urged the youth not to see culture as archaic, but rather leverage on the opportunities to enhance their skills for jobs.

He said very soon, the Region would become the largest exporter of smocks and cane products in the whole of West Africa, and urged the youth in the area to take advantage and learn the skills in the various traditional jobs.

The Deputy Minister said aside the growth of the local industries, the Region also had the famous crocodile pond and a Xylophone village, with steps being taken to develop them to international standards to attract tourists.

Later, a choral Festival featuring choral groups from all the 16 Regions was held.