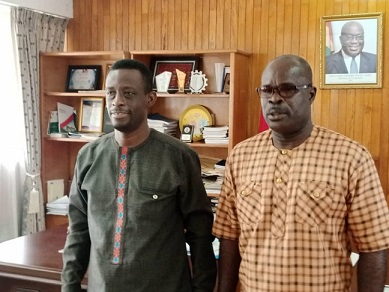 “The RCC’s resolve is to make the Western Region the model Region of Ghana and this can not be realized if entrepreneurial governance is not entertained,” he said.

The Minister was speaking when the Western Regional Director of GBC Western Radio, Mr Alfred Osmond Hughes paid a working visit to the Regional Minister to formally introduce himself to him.

The Minister urged the GBC to be at the forefront of such a vision and drive by educating the people to embrace the concept and do the right thing.

“As a Regional station of the Ghana Broadcasting Corporation, drive this agenda well to better position the Region for business, growth and the development,” he said.

He acknowledged the challenges facing the Corporation, “your issues are not new to me but necessary steps are being taken to address them.”

Mr Alfred Osmond Hughes expressed gratitude for the warm reception and congratulated the Minister for his reappointment as the Regional Minister.

He alluded to the conducive business environment under his tenure and pledged the station’s commitment to grow and sustain it.

The Director said though GBC remained a public broadcaster, there was now the need to change some of its activities to generate revenue.

He said management had resolved to transform GBC, relax bureaucracy and introduce more business approaches to sustain it.

Mr Hughes promised to support the work of the RCC by ensuring that their activities were sold to the public through news and other talk shows to help sell its ideas and works.

We are positioning Western Region as tourist destination in Ghana – Minister