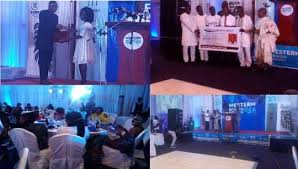 The Western Regional branch of the Ghana Journalists Association (GJA) over the weekend honoured deserving members and media houses who excelled in line of their duty at the Best Western Plus Atlantic hotel in Takoradi.

The maiden event was to recognise excellence in journalism in the region. It was on the theme: “Redefining corporate social responsibility; Moving from handout to legacy projects, the role of the gatekeeper”.

This year, eleven journalists out of the eighteen applications received by the award committee were penciled for awards in various categories.

Mr Theophilus Kwesi Agyei Annim of Citi Television was crowned the overall best journalist of the year 2019 for demonstrating commitment to work, high sense of professionalism, accuracy in reporting and delivery, upholding ethics of the profession and vocal in championing journalist’s welfare.

Ms Erica Apeatua Addo of the Ghana News Agency (GNA) won the best journalist in court reporting for her dedication and competency, while Mr Alfred K. Adams of the Chronicle newspaper had the best in political reporting.
Ms Ina Thalia Quansah of Radio Maxx in Takoradi, who also reports for the Multimedia Group picked up best in general news reporting and best rural reporter.

She again won the most promising young journalist for playing key role in making the Takoradi girls kidnapping a national issue, vocal in pursuing gender issues, commitment to work, daring to go beyond boundaries, taking up challenges and upholding the ethics of journalism.

Other award winners were;Mrs Nana Adwoa Entsuah of Empire FM, best in health reporting, best in education reporting went to Madam Marie Aziz Tunde of Twin City Radio with her story on sex education and Mr Kojo Fletcher crowned the best in responsible mining with his story, “Starving the goose that lay the golden eggs.”

Mr Eric Yaw Adjei received the best in environmental reporting for his story on Plastic waste, best in illegal mining reporting went to Mr Charles Egyir of UTV for the story, “Galamsey operators back in the Western Region” and Ms Benedicta Esi Brew Monney of Space FM won the best female journalist of the year.

Addressing the attendees, the guest speaker, Mr. Koney said the Western Region was highly endowed compared to its peers, but that endowment must begin to reflect in the people’s reality.

He tasked journalists to participate in public hearings organised by the Environmental Protection Agency(EPA) to fine out the needs of the people prior to the commencement of operation of an extractive company as well as town hall meetings planned by mining firms and the host communities to discuss the establishment of foundations and trust funds.

According to Mr Koney, vehicles run social investments in most mining communities; hence the need to make their voices count in this regard.

He implored Journalists to position themselves to be part of the discourse on the determination of appropriate initiatives that could bring real change in the lives of their people.

The chairman for the occasion Mr Boadu-Ayeboafoh applauded the recognition given to retired journalists who served in the Western Region at the awards ceremony and the decision to use outsiders to technically measure the standard of journalism practice to select the award winners.

He quizzed how practical it would be to adopt that as a complement to the awards ceremonies of the association because most of the time, professionals were in charge of those professional awards.

Mr Boadu-Ayeboafoh said ” if we engage outsiders, they may do more objective analysis of some of the things that we do and so even if we will not totally leave it in the hands of outsiders, at least we must bring in some other professional groups to support and complement the efforts of the journalists, so that we combine some professionalism with some technical understanding and academic influence in the way that we go about doing the things that we want to do.”
The Western Regional Minister congratulated all the award winners and reminded them to maintain professionalism in their work as they had enormous responsibility to the citizens of Ghana.

The National GJA President Mr Affail Monney, commended the regional executives for instituting a welfare package for retired journalists to enable them have reliable and accessible quality healthcare.

Dr Moses Maclean Abnory, the Registrar of Takoradi Technical University, who chaired the five-member committee to consider deserving members who put in entries for the regional awards recommended to GJA to organize intermittent workshops on modern trends and effective ways of reporting on various fields of journalism.

He said journalists must be professional in their line of duty, ready to take challenges and go the extra mile in making the society better, go behind the speeches and presentation at programmes and workshops and rather generate new ideas for investigations, adding that, these would help improve upon the work of journalists in the region and the country as a whole.