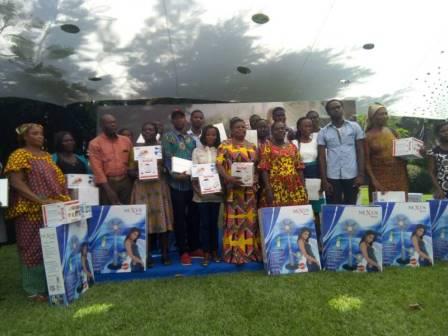 Western Union, the global leader in money transfer service, has rewarded 130 customers across the country for their loyalty and usage of the Western Union Money Transfer Service.

The Customers rewarded under a promotion dubbed: ‘’Western Union Back to School,’ saw them presented with consolation prizes such as iPads, Appliance packages which consists of rechargeable standing fans, pressing irons and electric kettles.

The promotion which spanned September 15 to October 15, 2017 was aimed at appreciating customers for making Western Union their preferred money transfer service.

Mr Joseph Nketsiah, the General Manager of Treasury, HFC Bank, said the promotion was to reward loyal customers and also to attract potential customers to the Western Union brand.

He said due to the value Western Union had placed on its customers it had designed promotions such as Easter Promotion, Back to School Promotion and Year End Promotion in order to shower gifts on the customers.

Mr Nketsiah noted that the regular flow of remittance from the developed countries to Africa for the past 10 years had strengthened its economical prowess and improved standard of living of its citizenry.

He said over the past years of reliability and experience, Western Union can be described as fast, convenient and reliable.

He said in Ghana, Western Union had over 1,700 outlets from thus making it easier for customers to receive their remittances than any other money transfer entity.

Some of the lucky winners who spoke to the Ghana News Agency expressed gratitude to Western Union and called on the citizenry to patronise the services as it could be compared to none.

Get the right feeling with HUAWEI MatePad T 10s