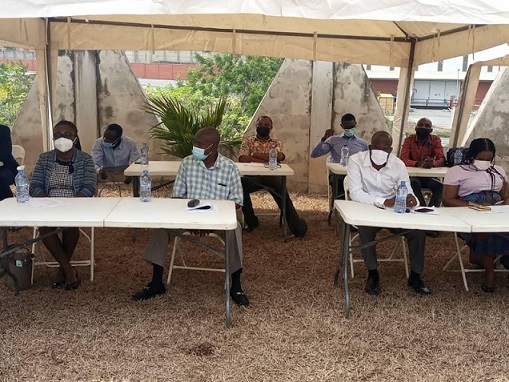 The Savannah Regional Manager of the National Health Insurance Authority, Dauda Mahama, has said the Savannah region region in the year 2021 under Review, achieved 50% active membership enrollment.
This he said was against the backdrop of a projected population of 653,266 eligible clients out of which a total of 329,445 clients were enrolled, representing 50% of the target population.
The Regional Manager made this disclosure during the 2021 Annual Performance Review meeting held at Damongo, the Savannah Regional capital.
According to him,the annual review meeting was a routine activity on the calendar of the National Health Insurance Authority where operational activities regarding membership of all categories among others are peer reviewed with District Managers and staff.
Describing the performance as satisfactory,he admonished all District Managers and staff to accept criticism of any sort especially, in their  service delivery and strive on that basis for improvement.
He said the ultimate goal was to achieve theme, “sustaining the gains for universal health coverage”.
On mobile renewals,the manager revealed that a total of 224,146 target population was allocated to the region of which the region was able to meet a total of 114,731, representing 51%.
He outlined some challenges the Authority was facing in the region including, illegal payments from service providers, NHIS members waiting to be sick before they renew their membership, poor network connectivity in some communities, service providers not renewing their credentials on time, the difficulty in merging members NHIS cards with the Ghana card due to personal Data mismatch among others.
The Claims Processing Centre Manager in charge of the Northern regions, Isaac Akonde, in an exclusive interview with this source on co – payments and illegal payments by health care providers said there was no justification whatsoever for illegal payments.
He pointed out that,”irrespective of the reason, “an illegality is an illegality, not withstanding how much one can justify it”, adding that, every service provider has a service fact that they have signed with the NHIS to provide a certain set of services to its members where the NHIS will intend reimburse same for those services rendered.
According to him, any service provider who has reason to believe that the services they rendered to clients are not matching with the cost of providing those services, they should engage the National Health Insurance scheme rather than asking for money from the poor clients for whose reason the NHIS exist.
He said it is illegal for service providers to demand for money from clients once the services are covered by the National Health Insurance scheme, adding that, there is an avenue to engage with the necessary stakeholder where there is an excess cost rather than transferring the cost to the vulnerable poor patients.
Mr. Akonde further explained that, some of the service providers complaint of delays in paying their claims, reason they sometimes have to charge clients for the services rendered, stating that, there was frantic efforts to curbe the situation by ensuring that claims were paid on time.
Send your news stories to newsghana101@gmail.com and via WhatsApp on +233 244244807 Follow News Ghana on Google News