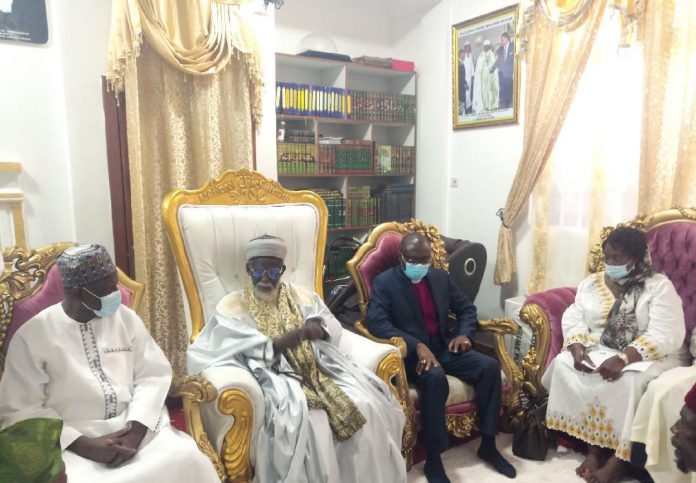 This was to enable the Council to brief the Chief Imam on its efforts to resolve the situation.

The impasse concerns the prevention of Muslim student from observing the just ended Ramadam fast for various reasons by the School’s Authorities.

The rest are Sheikh Armiyawo Shaibu, Bishop Emmanuel Kofi Fian, Sheikh Aremeyaw Shaibu, who doubles as the Spokesperson of the National Chief Imam, and Mr Geoge Amoh, the Executive Secretary of the NPC.

Rev Dr Adu-Gyamfi in his remarks thanked the National Chief Imam for accepting to play the role in the Presidential Peace Pact signing towards Election 2020.

He also expressed gratitude to him for the role he played when the Wesley Girls’ issue came up, by calling his team together and appealing to all of them to remain calm as they sought to solve the problem.

“And we see this, as part of your nature and your desire for peace and consensus (building) in this country. We believe that those appeals have helped to tone down the tension in the country,” he said.

“Ghana has been a very peaceful country, and we believe that we have been the envy of all our neighbours and we have existed peacefully among ourselves.”

He said the Council in its efforts to resolve the impasse had already met with the Presiding Bishop of the Methodist Church, the Parents Teachers Association (PTA) of the School, Old Girls Association of the School and the Ministry of Education.

He informed the Chief Imam that the Council in interactions with the Ministry of Education, they had come to the consensus that within the next two weeks there should be a memorandum of understanding (MoU) governing the all-mission schools and all public schools in this country

He said the document also specified clearly what were the rights, the privileges, and also the responsibilities of every individual who went to those schools.

“And we want this document to be documented and signed by all parties who agree to it; that at the end of the day, once you take that document, everybody knows what can be done and what cannot be done,” the Chairman said.

“We believe that if this is pursued to its logical conclusion, this matter would come to an end, that Ghana would not see this again.”

He said the document would also incorporate some of the issues that the Peace Council recommended in 2015 when the hijab issue came; in which there were some recommendations that were made, which were not implemented to its logical conclusion.

“We are bringing those recommendations into this new document, so that at the end of the day, everybody in this country would be satisfied.”

He said when the draft document was ready, it would be brought back to all stakeholders to look at it; adding that this would ensure that all were satisfied with it before they sign it; adding that the document would online what could be done and could not be done.

Rev Dr Adu-Gyamfi noted that some people were using the issue as an opportunity to divide the nation further by using rehash videos and tapes.

He also appealed to Ghanaians to remain calm; saying “ let’s stay together as one people with one destiny”.

On his part, Dr Sheikh Osman Nuhu Sharubutu said God had been gracious to Ghanaians by giving them peace, and that adherents of various faiths were able to live in peace and harmony in the country; saying that Ghanaians must preserve the peace of the nation.

Citing the Holy Koran, the National Chief Imam advised Ghanaians to always communicate with each other in a civil manner.

Maulvi Mohammed Bin Salih, who doubles as the Ameer and Missionary-in-Charge of the Ahmadiyya Muslim Mission of Ghana, urged Muslims in the country to see themselves as an embodiment of peace.