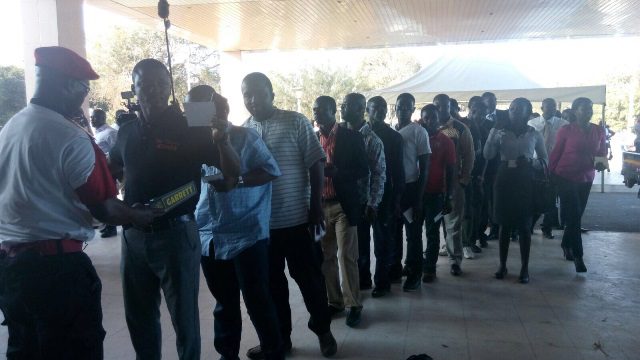 How do you understand if you are a Church-goer or a true believer in the principles of Christianity when the bible says in Matthew 6:33 – “But seek ye first the kingdom of God, and his righteousness; and all these things shall be added unto you?” Will you not have everything as a tribesman if you rather seek first the collective interests of Ghana than the parochial interests of your tribe? The advice to human beings as found in the bible verse quoted above is that once you have sought to gain favour in the eyes of God by doing as He has directed, the acquisition of wealth through proper channels, good health, peace of mind will all be added unto you. The material prosperity and the tribal supremacy you are seeking now through foul means will all be “jaara” (bonus) as a Hausa person will say, to you.

Why don’t we go by the order as directed by God but are rather doing things in the reverse order as though we have no brains to think right?

Today, I want to inform all Ghanaians worldwide that our deep seated tribal sentiments and leanings that dictate our political leanings or affiliations is not the rightful; it is not the proper method of achieving prosperity, respect and international recognition for Ghana as a civilized country. It does not bring unity among Ghanaians but division.

Have you not heard about the saying, “In unity we stand but in division we fall?” This is a proven fact whether you like it or not. Why have we allowed politicians who are seeking their insatiably greedy and selfish ends to wield an axe against our unity as a nation? Do we not understand that the more they are able to divide us along tribal lines, creating unnecessary tensions and unfounded animosities among us, the easier they are able to exploit us, steal our money to acquire illegal wealth and power without anyone becoming conscious of their intents until it is way far too late to correct? Are their intentions not almost always detrimental to our collective interests? Are their intentions not bordered on “divide and rule” tactics by which they can easily attain their targets without shedding much sweat?

In Matthew 12:25, it says, “Jesus knew their thoughts and said to them, “Every kingdom divided against itself will be ruined, and every city or household divided against itself will not stand” Why do we then allow these Ghanaian political crooks, who believe in riches more than good name, to fool us, playing on our intelligence, bringing enmity between us in their quest to achieve their personal wicked objectives, thus, acquiring wealth and power illegally?

Did one Hannah Hammer, a former member of the Mahama NDC-led government not say she wanted to obtain US$1 Million to be able to acquire power to command people in Ghana?

To those Ghanaians who are irrationally believers in tribalism, please help volunteer answers towards my research on “Tribalism and its effects on the development of Ghana”

Let me give you a case scenario to better prepare you towards how best you can assist me as just requested.

Mr. “A” is a member of your tribe, to be more precise, he comes from your locality or town. You campaigned tirelessly to get him voted to the directorship of a company. He has now become extremely rich. The money that the company gives to him to carry out social interventions, he keeps it for his personal use, building houses elsewhere in Ghana with it for himself, riding in luxury cars and living in well-managed mansions with garden boys, maids and you just name it, he has them.

Before proceeding any further, let me please pause to define what Social Interventions is:

“Social interventionism is an action which involves the intervention of a government or an organization in social affairs.[1] Such policies can include provision of charity or social welfare as a means to alleviate social and economic problems of people facing financial difficulties; provision of health care; provision of education; provision of safety regulations for employment and products; delivery of food aid or recovery missions to regions or countries negatively affected by an event; adoption programs; etc.” – Wikipedia.

When Mr. “A” acquired his illegal wealth aside from his normal salary, he does not respect people or even if he did, his family and he are living in affluence, able to travel overseas to seek medical assistance as and when they want. The ordinary person in the village has no access to better medical care, good roads, drinking water, hygienic public toilets etc.

Bad sanitation causes otherwise preventable diseases that can become fatal to occur in localities. When there are no toilets and people defecate in nearby bushes or refuse dumps as occurs in some villages, towns and even in parts of Accra, the Capital City of Ghana, it can give rise to contaminated waters and food the consumption of which can cause lethal diarrhoea and typhoid fever among the people of the locality affected.

When this Director who could not use the money purposely donated by the company for the realisation of social interventions in your area let alone, using part of his own genuinely acquired salary to help the locality comes to you nearing the expiry of his first term (tenure) of directorship to seek your votes for his re-election, what will you do? Will you vote for him, giving him the second chance because he is from your town, he is your friend, you know him and because of the proverbial fact that “Wo kurom pete di wo nnam a ebi ka?” The vulture from your locality will leave some remnants behind when feeding on your dead body unlike a vulture from elsewhere. Simply put, your countryman cannot be as wicked to you as someone from outside your locality.

From the scenario given above where your friends and family members might have died or suffered untold hardships from the actions of Mr. “A”, will you still give him the chance because he has said this time around he will not repeat his past mistakes? Will you vote for him because he is your homefolk or kindred but Mr. “B” who is actually honest and has verifiable proven record to tell what he is capable of doing is not from your tribe so you will not under the Sun, the Moon and the Stars, vote for him?

Did Mr “A” consider that he is a member of your tribe when he was stealing all the money meant for your collective well-being for his selfish interests? If he did not consider your welfare as a member of his tribe, why should you be that ignorant to continue to assist him directly to continue to abuse you? Do you have such a short memory?

Do you know how much knock-on effect the corrupt attitudes of Mr. “A” has on Ghana as a nation of sorry to say, cowards?

I shall come back to treat this topic again. I welcome all your inputs but mind you, be honest with yourself.
DON’T LET TRIBALISM ROB YOU OF YOUR SENSES AS A HUMAN BEING. YOU ARE NOT STUPID SO DON’T LET TRIBALISM MAKE YOU STUPID!!! WHILE YOU ARE BRAINWASHED BY A GHANAIAN POLITICIAN TO INSANELY INVOLVE YOURSELF, AND WALLOW, IN, TRIBALISM, HE/SHE WILL BE LAUGHING FEEDING OFF YOUR IGNORANCE. YOUR ACTS OF IGNORANCE KEEP THE GHANAIAN POLITICIAN RICHER BY EACH PASSING DAY.

Rockson Adofo
(Up and coming political strategist who has prophesies hidden in his write-ups if people might care to find them out. He is the champion of liberating the minds of Ghanaians from inferiority complexes, educating them on their rights and taking pretenders to straight to the cleaners without hesitation)