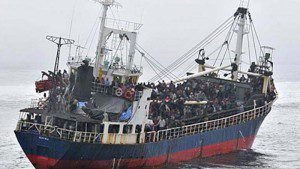 The recent upsurge in out-migration of Africans from Sub-Saharan African countries to Mediterranean-bound countries has hit international headlines and grabbed the limelight. It must be noted that the migration of Africans across the Sahara Desert to North Africa, and thence to Europe, is not a recent phenomenon. Students of History recall the trans-Saharan trade which blossomed hundreds of years ago during the apogee and zenith of the old empires of Ghana, Mali, and Songhai from 300 AD to about 1340 AD, when the Sultan of Morocco, jealous of the glory, wealth, and civilisation of the ancient Songhai Empire, and aided by western-trained mercenaries of Moors and Berbers from Morocco and Spain, literarily shot down the Songhai Empire in 1340 AD, with their newly-acquired armament of guns from Europe, under the rule of Ishak II.

The Songhai army was ill-equipped, wielding spears, swords, and bows and arrows. The hordes of Almoravids and the Moors had earlier on in about 1240 AD, terminated the old Ghana Empire by their incessant attacks, using the occasion to propagate their Muslim religion.

Historians like Dike, Ajayi,Fage, Webster, Basil Davidson,AduBoahen, F.K. Buah, Agbedeka, Ivor Wilks, Michael Crowder, AddoFening, among others had written vivid and extensive accounts about those illustrious empires from accounts left behind by ancient Arab and other writers such as Ali Bakry, IbnBatuta, IbnKhaldun, Leo Africanus, among others.

However, the recent surge in the unprecedented large numbers of north-bound African migrants rekindles the Akan proverb that states,?a rat may not run out in daylight unless it is in great danger orbeing pursued by a ferocious and formidable prey or foe?. Many youth in West Africa are desperate for something to do for themselves but they see no light at the end of the tunnel for themselves and out of utter frustration and social rejection, they embark on wide adventures up north into uncharted territories, into the Sahara Desert to pursue the Golden Fleece or seek an imaginary El Dorado.

The trans-Saharan trade route linked the forested areas of the Guinea coast to the south of West Africa with the North African countries of Morocco, Algeria, Tunisia, Libya, and Egypt. The ancient Carthaginians from modern day Tunisia, and the Phoenicians from modern day Syria and Lebanon, cherished greatly that trade, as they were among some of the greatest traders and seafarers in the ancient civilised world.

They exchanged dates, fabrics, beads, horses, ornaments, oils, silk and calico, porcelain and urns for forest products such as honey, ivory, feathers, parrots, gold, kola-nuts, and salt,among others. The camel caravan convoys criss-crossed and traversed the large expanse of the desert, from north to south, linking up trading nodes such as Fez, Marrakesh, Gao, KumbiSaleh, Timbuctoo, Agadiz, Kano, Salaga, Techiman, among others. That trade propped up those ancient African empires as they subsisted on the tax revenue from it. It also attracted great scholars and architects from as far afield as ancient Persia and Egypt.

Just as those fronting and fringing the Atlantic Ocean are lured by the azure expanse of the waters of the Atlantic Ocean to sail on their fishing expeditions, so are those in the forested interior to be challenged by the prospect of crossing the vast sandy Desert to see what lies beyond it. Perhaps, they will find greener pastures beyond the desert. Little will they envisage terrible ordeals awaiting them in those African countries on the shores of the Mediterranean Sea, and the ordeal of crossing the Middle Sea in dinghies, rafts, and fragile life-saving inflatable craft, amidst tempestuous storms and howling gales.

Hundreds of desperados pay fortunes to be crammed like sardines into the sea-unworthy crafts, and at some point in time, their crafts are marooned at sea without victuals, amidst starvation, sickness, conflict, intimidation, beatings, rape, torture, and at worst, facing the dim prospect of shipwreck or being thrown into the sea by the wicked traffickers, or some severe storms in the boisterous sea taking its toll.

It reminds one of some sailor stories we heard of old concerning sailors sailing past the Bermuda Triangle, or Bay of Biscay, or it reminds one of the ignoble Middle Passage slave ships in the infamous Triangular Trade which saw millions of Africans ferried across the Atlantic Ocean as human cargo from West and Central Africa, and sold under inhumane conditions to slave owners in the Americas, who owned hugecotton, sugar cane, and tobacco estates. Thousands of that human cargo perished at sea due to illness, sea sickness, trauma, starvation, anguish, and torture. And thousands more were successfully ferried across to be offloaded into slavery in the Americas and the Carribean.

It is unusual to find graduates and educated young men and women going on such perilous journeys across the desert as such educated people know too well the high price to pay for such wanton and reckless adventure. Many are the tall tales told by some returnees from Italy and some European countries about the replete of jobs and promise of good jobs in those European countries. Many are the youth who are gullible and easily taken in by such yarns, as they know little about the economic travails and woes of the PIGS countries such as Portugal, Italy, Greece, and Spain. On enduring an ordeal of the harshest type by crossing the treacherous desert to North Africa, the young adventurers fall from frying pan to fire as they go from bad to worse.

They may be robbed of their meagre possessions by desert brigands and marauders. They may be arrested by gendarmeries and imprisoned under terrible conditions, raped and tortured. Many die of dehydration while crossing the desert. Many lose their bearings or direction as the sandstorms and typhoons and Simoons, and the Harmattan mist obliterate the footpaths on the desert, and without navigational aids, they end up wandering about aimlessly in circles on the wide expanse of sand, till they die of starvation and thirst.

Many are the skeletons found of such unfortunate ones skirting and dotting the grim desert landscape of barkhans, oases, zeugens, sand dunes, wadi, yardang and inselbergs or bornhardts. The lucky ones who make the crossing, find to their consternation and chagrin that there are far more daunting rivers to cross after their seemingly great triumph. They only realise that they have had a Pyrrhic victory. They may be rounded up in the Mediterranean African countries and charged with all sorts of offences.

They may be held for years on end, and eventually they may have a break to cross to Europe via Sicily, or the Island of Lampedusa, or Crete, or Greece, or Malta, orvia any of the thousands of islands dotting the Mediterranean Sea such as Kefalonia in the Ionian Sea. Other Greek islands in the Aegean Sea include Rhodes, Samos, Ikaria, Thassos, Lemnos, Chalkida, Lesbos,Cyclades,Zakynthos, and the main Italian islands are Sicily, Sardinia, Corsica, Elba, Ikaria, Hios, and Thassos.

The new arrivals from the south are brutalised, assaulted, raped, starved, tortured and imprisoned as if we had no African Union or Berne or Geneva Conventions and protocols, or the Universal Declaration of Human Rights. Most potential and actual migrants are half-educated non-professionals, artisans, mostly male, who are fleeing wars, economic downturn, religious persecution from terrorists, political upheavals, famine, social sequestration, bad governance, low quality of life, rising costs of living, poor standards of living, among other causes.

This is why it is imperative to dismantle the New Economic Order which is making millions of people unemployed, and enriching a scanty miniscule of humanity who are the captains of industry, and who are causing the poverty gap to widen more and more through systems of disintermediation, digital-driven online commerce, among others. The escalation in the scale of outmigration to Europe is caused by the big corporate giants who are not willing to employ young people but prefer to do business using robots and computers. They outsource work cheaply, thus creating fewer jobs, all in the name of disintermediation and globalisation.

On the part of the migrants, do they pause to rationally conjecture the choices between staying at home under failed governments and totalitarian regimes on the one hand, and that of going into an unknown country where even severe weather conditions can end their lives prematurely? Our churches, schools, social groups, government outfits, and the general populace have a duty to mentor their youth and dissuade them from embarking on modern day Marco Polo-like or Mungo Park-like adventures, which may lead them to a brutal and undignified demise. Many are the school-dropouts who are roaming the streets in the cities for want of anything useful to do and are governments are unconcerned.

For many years now, I have been thinking of the formation of a Pan-African institution for youth networking and transfer of skills and entrepreneurship to be known as the Great African Society for Social Political Economic Reconstruction Reform and Restoration (GASSPERRR). This organisation will help the youth register and move across boundaries to areas of employment where their skills are needed most. That can be organised under the auspices of the AU and UNDP/ILO/UNIDO/FAO/IFAD. They can be organised as Volunteer Corps and paid decent allowances for the type of tasks they undertake such as offering IT solutions, operating call centres, working on innovative research centres, working on farms, hospitals, emergency operations in Refugee Camps, among others.

There is urgent need for renowned research institutions such as Oxford and Harvard to carry out triangulation research of cross-sectional and time series data gathering to explain the root causes of the upsurge in this trans-Saharan migration. Perhaps, they will discover that failed educational systems, failed governments, electricity blues, unsustainable debt servicing, and inequitable social services distribution, plus lack of social support systems such as subsidised education and medi-care are among the major culprits behind the centripetal and centrifugal pull and push factors which drive this syndrome of trans-Saharan migration syndrome, and the panacea for curing this Pan-Euro migraine may lie within the conjoined efforts of the global community or comity of nations.

Tripartite taskforce facilitates repatriation of over 50,000 African migrants from Libya

Many Irregular African Migrants Have Died Within Two Months

AU chief calls for support to African migrants in Libya