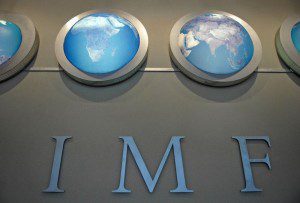 A newspaper vendor stood by the traffic light just around Opeibea in Accra, a day after Government had announced that it will be engaging the International Monetary Fund (IMF).

He held a newspaper with a headline to that effect, but was also running commentary for commuters when the traffic light turned red.

He will shout “Have you seen our end? Now we are going to IMF,” then he added a twist, that is why you should vote for someone like me…followed by his own campaign message of how he will make Ghana better.

When the light turned green and the vehicles had to move, I couldn’t help but laugh. IMF has become that talk of the day.

Everybody is talking about the IMF, when you see a group of three or more people gathered around a food vendor or passengers in a trotro (Commercial vehicle) you are likely to hear about Ghana’s IMF engagement.

The narratives around the IMF are so diverse, to some it is a disgrace, we shouldn’t have even ventured, and we should have focused on home grown solutions to raise funds for governing.

To others it is the only viable option for us, as a country now.
What is the IMF?

The International Monetary Fund is an international organization which was created by the United States and the United Kingdom at the end of the Second World War.
Its original purpose was to give loans to countries suffering from short term economic crises, in the expectation that they would quickly recover and the loans would be repaid.
Overtime, the IMF has shifted to lending countries in longer term economic crises that were unable to pay their debts.

The IMF in such cases usually insisted on changes to government policy such as cuts in government spending, increases in regressive taxes such as VAT, privatization of state owned companies and removal of regulations on businesses.
Varied Ghanaian opinions about the IMF

Many Ghanaians who have expressed reservations about Ghana’s going to the IMF cite what has become known as the conditionalities as the main source of worry.
Some have speculated that many of the government’s flagship programmes risk being stopped by the IMF to enable Ghana sanitise her economy.

Some also think that the marketing of “free” programmes has been our bane as a country especially in an economy, where many people do not demonstrate responsible behaviour but feel entitled to luxury development.

Going to the IMF, will mean that we will have to re-evaluate our lives as Ghanaians. In Ghana everybody that completes school especially tertiary education looks forward to being employed in the government sector.

It is no news that that the public sector is flooded with people who sometimes go to the office and do not do any productive work and yet get paid by the government at the end of every month.

Sometime ago, the private sector was touted as the engine of growth, but it seems that a lot of people look forward to being employed in the government sector, that is the only time, people respect you as doing something worthy.
The IMF and Unemployment

One of government’s campaign messages was to provide a number of jobs for the youth, a large number of Ghanaian youth flooded the public sector under a programme called the Nation Builders Corp (NABCO)

In some offices these youth did not even have places to sit, let alone to do some productive work but government had to find money to pay them

Yet there are jobs like Caregiving, which is a vibrant industry in many developed countries but non-existent in Ghana.
A lot of Ghanaians that travel abroad to work at caregiving homes to care for the aged or for children with disabilities and other special needs.

Some have also suggested lifestyle change for the average Ghanaian, like living within our means, eating our local food, engaging in backyard gardening, taking on positive attitudes and respecting every job so far as it brings income.

Dr Mark Assibey Yeboah who was the Chairman of the Finance Committee for the Seventh Parliament of the Fourth Republic of Ghana, has however expressed the belief in the IMF to be able to help Ghana get back on her feet.

In a media interview, he said “If I were the Finance Minister, I will pack the economy with the IMF,” he explains that when the IMF is in town, things are in check.
He also said that government’s programmes such as NABCO, School Feeding, Teacher and Nursing Training Allowance among others should be scrapped.

Some believe that it is time for the government to take hard decisions. In Ghana, taking hard decisions also means losing the elections.

It is ironic though that for the NPP led government that touts capitalism or liberalism as their guiding principle will implement so many socialist programmes.
It is time for Ghanaians to be taught that every single person has a role to play in the development of the country, the duty of the Ghanaian is to be responsible by paying taxes and being productive as well as demand accountability from our leaders.

Whether IMF or not, I believe that our attitudes and mindsets as Ghanaians can go a long way to spur us to development.

I am however optimistic that if Ghana survived the much talked about 1983 hunger period, then Ghana will survive this Global economic crisis.

Ghanaians advised to be creative in technology usage