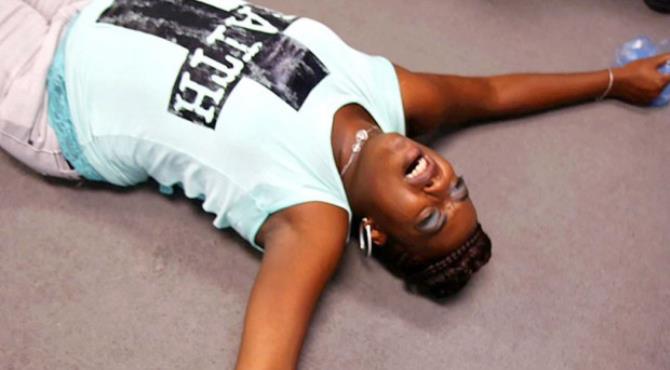 As expected, this sparked off much debate as to whether the practice of casting out demons – known as ‘exorcism’ in certain religious circles, or as ‘deliverance’ in the penteco-charismatic world – is true at all, or false.

Several pessimists vigorously argue that exorcism or deliverance is merely a sham because evil spirits, otherwise called devils or demons or satanic forces or unclean spirits cannot be cast out from their beloved habitats.

To the pessimists (those who doubt the expulsion exercise), witches and wizards for instance can only have their ‘wings clipped’ for some time by some superior spiritual forces so they cannot fly in the night to ‘do the undo’. But after a while, their wings are said to grow again which enables them to fly for their nefarious activities.

The pessimists cite the old-time traditional practice of witchcraft exorcism of the Tigare, Asaase, Katawere etc. fetish cults of the 1940s and 50s which often failed to deliver, because the same witches who were often caught and exorcised with herbal concoctions (they drank and bathed it) were again caught and exorcised again and again!

It is therefore deducted that witchcraft is inexpellable, just as all other evil or unclean spirits. The second premise which is used to support this inexpellability concept is derived from Christ’s explanation that:

‘When an unclean spirit goes out of a man, he goes through dry places, seeking rest and finds none. Then he says: ‘I will return to my house from which I came’. And when he comes, he finds it empty, swept and put in order. Then he goes and takes with him seven other spirits more wicked than himself, and they enter and dwell there. And the last state of the man is worse, than the first’ (Matthew 1:43-45)

Recently, a pessimist humorously contended that since the devil inhabiting a place has not a Rent Control Officer to whom he can appeal when being expelled, all he can do is to silently leave, only to recruit seven macho devils, well versed in ‘karate’ and ‘taekwondo’ fighting so to hit back to possess their victim again. To him, if Jesus himself says that evil spirits return when driven out, it means they are inexpellable. So all the fuss about deliverance in modern-day churches means nothing.

Of course, it is illogical to draw a conclusion from the ‘ineffectiveness’ of the exorcism method used by fetish cults and then tag it on the Pentecostal or Charismatic system and describe it as also a sham. As to the traditional method, it is argued that even the exorcism administered by fetish cults on witchcraft was mostly fake or ineffective, it is generally agreed that the expulsion of spirits in juju ‘spells’, or tormenting ghosts, through the bathing of some special exorcising herbs (sasa duro) was, to a large extent, effective. This, of course dismisses the blanket theory that exorcism or deliverance as a whole is mere fakery. It is never so.

Come to Christ’s reference to the fact that evil spirits return to their place of abode when expelled. This does not mean that they cannot be expelled forever from a place or a person. The simple logic here is that the return of these unclean spirits is contingent upon the situation when their former habitat still remains empty or unguarded by angels or the Holy Spirit after their expulsion. But where their former abode has been guarded by superior angels or the Holy Spirit, can the demons come back again? – No; not at all!

In fact any case of exorcism or deliverance is a question of angelic conflict – a fight between heavenly angels and devils or demons which St. Paul describes as ‘principalities and powers’, rulers of darkness of this world (Ephesians 6:12).

It is of interest to note that Jewish theology (which covers Jewish mysticism) explains that there are nine choirs of angels; namely(from the lowest to the highest) – angels, archangels, principalities, virtues, powers, dominations (or rulers), thronis, cherubim and seraphim.
St. Paul’s allusion to ‘principalities, powers and rulers of darkness of this world’ shows his expert knowledge of Jewish theology. There is an allusion again that the heavenly angels have their counterparts in the devil world which consists of the once heavenly choirs of angels expelled by God to the earth.

St. Paul therefore seeks to establish that the angels who sinned with Lucifer or Satan ranged from ordinary angels up to the throne angels ( the ‘thronis’ which are the seventh choir of angels) who are known to be spiritually wicked commanders and whom only angels of higher powers like the cherubim and seraphim, or better still, Christ power can expel.

Casting out these demons (ranging from angels to principalities and thronis) thus demands the power of Jesus, which fact St. Paul explains sententiously: ‘that in the name of Jesus, every knee should bow, of things in heaven and things on earth and things under the earth’ (Philippians 2:10).

In the circumstance then a Christian deliverance minister does not require any herbal concoction to cast out devils, much as it happened at Akosombo about fifteen years ago. All he needs to do is to regularly fast and pray, be Spirit-filled, take authority from Christ with full faith, and expel demons in the name of Jesus.

Rev. Bill Subritzky confirms this truth in his book Demons Defeated. He says: ‘ unless we have had a personal encounter with the Lord Jesus Christ and have allowed Him to be not only Saviour of our life, but also our Lord as baptizer in the Holy Spirit, then we will lack the authority which is required to minister deliverance’.

Nonetheless, deliverance should be immediately followed by spiritual and moral reorientation of the delivered, all by the study of the Word of God, and by the love of God, and by continual prayers which can or protect him from further demonic aggression because the Lord ‘ shall give this angels charge over a person who calls on his name. (Psalm 91:1-13)

Casting out devils is indeed a true phenomenon. It really occurs not through a pastor suspecting somebody and branding him an ‘ayen’ or ‘bayifuo’ (a witch). Any pastor who does this is a fake, untrained pastor, a pastor Banza! Again, expelling demons does not occur through herbal power, nor by occult exorcism, but through the supreme power of Jesus whose name only can drive out witchcraft and elemental spirits who call themselves gods, and thus assume the funny names like Nana Ti-brukuso, Nana Obubuyaya, Nana Gyabirikuku, Nana Opae-buo, Nana Mporiwaawaa!

But mind you, ‘deliverance’ is the most difficult ministry. So a pastor should not try it if he is not well-prepared for it, or if he has not the commanding Christ power for it. Otherwise he will be ‘scevannised’ or attacked and torn into pieces by some macho devils! (See Acts 19:12-18).

To me Jesus alone is the overcoming power!
By Apostle Kwamena Ahinful / dailyguideghana.com