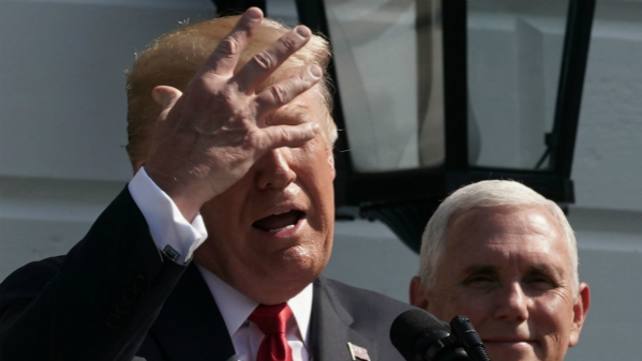 tca/dpa/GNA – For Donald Trump, the cost of an incendiary presidential career started adding up on Day One: Macy’s department stores stopped selling his menswear collection after he called Mexican immigrants “rapists” during his first campaign event.

A few months later, after Trump called for a “total and complete shutdown” of Muslims entering the United States, he lost another partner, a Dubai company that had a license to sell Trump furniture in the Middle East, Africa and India.

Since then, his outrageous comments and controversial presidential actions have lost his business empire a slate of lucrative partners and investors.

In the wake of the Washington deadly riots by Trump supporters that led to a second impeachment, a fresh wave of businesses have canceled partnerships and contracts with Trump, tarnishing a once-lucrative brand so badly that hospitality experts and brand reputation consultants say it may never recover.

“That dumpster fire he created is one of the single worst moves for his brand ever,” said Eric Schiffer, chairman of Reputation Management Consultants.

“What happened last week [during the riots] is a huge tarnishing of the brand, and I don’t see how it recovers,” he said.

Since the January 6 riots, the list of businesses and governments distancing themselves from Trump has grown to include Deutsche Bank, Signature Bank, the PGA, the city of New York, commercial property brokerage firm Cushman & Wakefield and JLL, the firm working to sell Trump International Hotel in Washington.

“What you are going to see is the unwillingness of corporate America to stay at some of his branded facilities or to play golf in Trump golf courses or to engage in any business activities with the Trump brand,” said Eric Rose, a partner at the lobbying and communication crisis firm EKA.

Many other businesses have vowed to stop contributing to the campaigns of politicians who refused to accept that Trump lost his reelection bid, including Marriott International, Blue Cross Blue Shield Assn., Dow Chemical, Hallmark and Verizon Communications.

Trump faces a loss of access to capital as well. Deutsche Bank had been Trump’s go-to lender for years. Without it, he may be hard pressed to get the funding to launch any new ventures or refinance old debts.

“Banks will be asking themselves, ‘What kind of certainty do I have that they will be able to repay me given the overall brand is damaged’,” said Nicolas Graf, associate dean at New York University’s Jonathan M. Tisch Center of Hospitality.

An email to the Trump Organization was not returned but Trump’s son Eric told the Associated Press that his father’s business empire was taking hits due to a liberal “cancel culture.” He added that his father will leave the presidency with a powerful brand backed by millions of voters who will follow him “to the ends of the Earth.”

As Trump transitions back to his real estate and hospitality conglomerate, some experts are reluctant to write his business obituary. They note that the former television personality still has a devoted, hard-core following, including more than 74 million who voted for him in the last election.

Converting those supporters into customers will be challenging, however.

In 2009, Trump reported that his licensing partners had sold $215 million worth of Trump-licensed goods worldwide. The number of Trump-named products has diminished considerably over the last decade, and experts say his name can no longer draw that kind of money — if it ever did.

Journalists and his former attorney Michael Cohen have repeatedly accused Trump of exaggerating the value and financial health of his properties. Forbes estimates last year that Trump’s personal net worth dropped by 1 billion dollars in less than a month to 2.1 billion dollars, largely due to the effect of the coronavirus pandemic.

A relentless salesman, Trump is not likely to retreat in the face of widespread condemnation, and may yet find a way to profit from the devotion of his followers, Allieri said.

“There are going to be many people who don’t see his role in what happened in the Capitol as wrong and have no problem going to his hotels,” he said, adding that Trump’s brand could have more value outside of the U.S., in the Middle East or Asia.

Instead of slapping his name on high-end hotels and ritzy golf resorts, experts say Trump may try to generate revenue through speaking engagements or producing a podcast that would appeal to his political supporters. Before he was elected, Trump associates talked about launching a right-wing media empire.

Even that could be an uphill slog if Trump were prosecuted and convicted on a number of criminal charges he may face after leaving office.

For a squeaky-clean outfit such as the Girl Scouts, even a tangential association with Trump is now to be avoided. The Girl Scouts of Greater New York posted a statement on their website saying they are trying to get out of a lease of a Trump building on Wall Street.

“As a matter of very high priority, our organization has been exploring options for getting out of the lease and the building,” Chief Executive Meridith Maskara said in the statement. “We continue to investigate our options and work to find an office space that would best serve the girls of New York City.”

In perhaps the most symbolically freighted gesture of all, the city of New York, where Trump built his reputation as a cocky, self-promoting real estate developer, is trying to distance itself.

New York Mayor Bill de Blasio blamed Trump for inciting the riot in Washington and said the city is now moving to cancel contracts with the Trump Organization at two ice-skating rinks and a carousel at Central Park, and the Trump Golf Links at Ferry Point, a city-owned course in the Bronx. The Trump Organization has made profits of about 17 million dollars a year from the contracts, the mayor said in an interview on MSNBC on Wednesday.

The fallout isn’t limited to companies, or people, with “Trump” in their names. After the Washington riots, Lime Chief Executive Wayne Ting wrote to his employees, saying the e-scooter start-up would “never support or spend money at any of the business ventures and affiliates of the Trump and Kushner families,” referring to Trump’s son-in-law, Jared Kushner.

Rose and other experts said there is always a danger in tying a brand to a personality because that one individual’s failures and controversies could drag down the entire business. Examples include retail icon Martha Stewart, who served five months in federal prison related to a stock trading case, and fashion designer Steve Madden, who served 31 months in prison for stock manipulation, money laundering, and securities fraud. The scandal of prison sentences clearly diminished both brands, but Stewart and Madden eventually rebuilt their business empires, albeit to a lesser height in the case of Stewart.

Trump may not be able to do the same, considering the seriousness of his transgression, experts say.

“If the brand is so inexorably tied to the person, the fortunes of that brand are a direct consequence of what people think about that person,” said Aimee Drolet Rossi, a marketing professor at UCLA’s Anderson School of Management.

Even before his turn to politics, Trump’s brand carried significant baggage in the form of a series of bankruptcies, lawsuits and failed business ventures, she said.

“The question is whether this insurrection will be the last nail on the coffin, but the coffin was already six feet deep,” Rossi said.