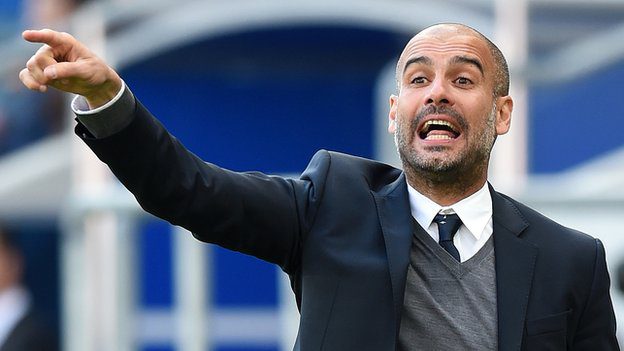 When Pep Guardiola announced that he was to leave Bayern Munich at the end of the season because he wanted to manage in the Premier League, the super clubs in England were put on red alert.

Arguably the best young manager in the world at present, there is not a club in the world who would not be interested in the Spaniard’s services.

As a manager, the 44-year-old has two Champions League trophies to his name, alongside three La Liga and two, going on three Bundesliga titles. His appointment would almost guarantee success.

There are three teams in the Premier League fighting to land the former Barcelona manager. Let’s see the options available to him.

City are reportedly the favourites to make Guardiola their next manager. The Citizens have the financial clout to dominate European football, but are currently lacking something.

Their title assault has been far from perfect this year and the team has reached top gear in too few of their games.

However, there is no denying the talent that would be available to Guardiola. The signings of Kevin De Bruyne and Raheem Sterling have added a youthful energy to City, which would suit his style of pressing the opponent in their own half.

The club have also been busy modelling themselves on Barcelona in a number of areas.

The first phase was complete in 2012 when former Barca employee Txiki Begiristain was hired as Director of Football at the Etihad, with the task of completing signings.

The second step came with the building of City Football Academy, the structure for the club’s youth team which is heavily influenced on Barcelona’s model.

Signing players such as David Silva was of course another crucial element of City’s progress and the next step would logically be to hire Guardiola.

If they are to go for Guardiola, they would part with current boss Manuel Pellegrini, who could yet win this year’s title. It may not look good on the club to sack a manager after winning the league, but few could blame them for moving for a manager who could turn them into serial winners, both home and abroad.

Guardiola may however find the lure of London, and Chelsea, more appealing than Manchester.Unlike City chiefs, Roman Abramovich would not have the potential moral dilemma of sacking a manager after a successful season.

Guus Hiddink was only installed as temporary manager after Jose Mourinho was dismissed for a truly abysmal defence of the team’s title. It leaves the door open for a new manager in the summer and who better to take over than Guardiola?

Abramovich has long pined for attractive football at the Bridge. Whilst he has overseen the club’s most successful period, the style of play has not been at the standards of Sir Alex Ferguson’s Manchester United, or even Liverpool, when they finished second in the 2013-14 Premier League season.

There is a fine balance between style and success, but there are few who would doubt that Guardiola could bring both to West London.

Would he be put off by the lack of young players making the step up to the senior team, or the constant managerial upheaval at Stamford Bridge though?

The third team in England to be alerted to Guardiola’s situation is Manchester United. The Red Devils have been slaughtered by fans, pundits and even sponsors for the style of play that has been adopted under Louis Van Gaal and a change has been mooted.

There is a lot for Guardiola to like at Old Trafford. The club has the most history out of the three on this list and are probably the closest to Barcelona in regards to global appeal. There is a magic at United, especially on European nights, which the other two clubs cannot yet compete with.

United directors may have planned for this. Guardiola’s Bayern contract was always set to expire at the end of this season and it was always likely he would leave Munich.

They steadied the ship with Van Gaal and returned to the Champions League after one tough season under David Moyes. But did they ever think the Dutchman, at 64-years-old, would stay long term? It’s unlikely.

So whilst City remain favourites, there are other options open to Guardiola that could interest him. Where is he going? Time will tell.

Please pick up a free copy of The Player at Premier Ghana retailers for more news, features and betting tips.