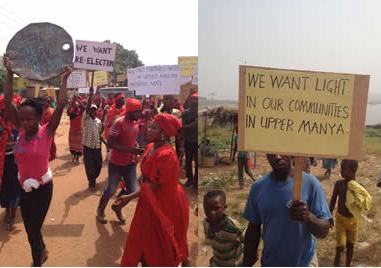 “Effective leadership is not about making speeches or being liked; leadership is defined by results not attributes” (Peter Drucker).

A POTENTIALLY DANGEROUS CRISIS BUILDING UP IN THE GHANAIAN BODY POLITIC

While the newly elected Ghanaian president was happily reading out a plagiarized inaugural speech to the world, his misguided bands of marauding footsoldiers were on a rampage reportedly seizing state properties at will.

This well-planned rampage has been going on even post-inaugural in parts of the country as the new leadership of the country appears to be trapped on the comal bed of political inaction. The nation’s security institutions and those at the headships of these institutions appear to have gone to sleep also.

Yet security is a national issue not a partisan one. This is lost on the largely partisan marauding hooligans and vigilantes. Political stability is what Akufo-Addo needs in order to carry through his campaign promises. Thus, we cannot and should not entertain deviant behavior that will undermine any collective efforts geared toward stability and peace. This is extremely important.

Compromising the relative stability and peace the country enjoys today certainly will spell disaster for implementing progressive programs aimed at alleviating the excruciating burden of national suffering due to lack of jobs, high standard of living, unemployment, and mass poverty.

That is why a swift resolution of this marauding craze in parts of the country is urgently needed.

For Ghana already enjoys political freedom, so too is economic freedom—both in relative terms.

To rephrase this, we shall say that the fundamentals of political and economic freedoms are already in existence and thus chaos of any form will derail the country’s economic development, that is, throw the relationship between economic and political freedoms on the one hand and on the other, stability and peace—out of balance.

In this kind of atmosphere Akufo-Addo’s and the new administration’s promised change will remain a pipedream. He does not want to want to have this terrible experience where this brewing crisis evolves into a stubborn situation.

It is here that Akufo-Addo must demonstrate the high quality, proactive, and visionary leadership he promised Ghanaians, to show Ghanaians that of all things he is more than capable of strong and moral leadership.

In other words, he must not desist from stamping his authority on these outliers who are also unabashed betrayers of the norm. He must do this immediately without equivocation. Akufo-Addo needs to do this to cover his rear.

CRITICAL PERSPECTIVES: EFFECTIVE LEADERSHIP AS AN EXPRESSION OF COLLECTIVE RESPONSIBILITY

“A leader is best when people barely know he exists, when his work is done, his aim fulfilled, they will say: we did it ourselves” (Lao Tzu).

Effective leadership is holistic, holistic in that it does not revolve around the psychological-emotional island of one person or of a group of persons whose idiosyncratic temperaments singularly dictate to or are imposed on the subdued or neutralized generality of a critical mass merely for tactical and strategic purposes of political expedience and elitist marginalization of the ruled.

Effective leadership therefore constitutes a critical mass that pays obeisance to the operational integrality of the collective dignity of a people, who want to shape their collective destiny befitting their aspirations, history, common challenges and experiences, and social psychology, among other things.

In effect, effective leadership follows the appealing cosmology of pointillism in which every single point in an artistic narrative or space contributes to the collective aesthetic integrity of human creativity. In sum, therefore, effective leadership is a distributive network that must directly flow from a center or source of concentrated authority and power, a source fundamentally defined by the summative input or contributions of citizens to the wellspring of wakeful leadership.

What this in the larger scheme of things, in fine, also means is that Akufo-Addo does not exclusively define the character and social dynamics of leadership. We are hereby talking about devolution of power, more specifically delegation of power or decentralization of power, of institutions and so on. This essentially makes leadership in our opinion one of collective responsibility, a sort of great supply-chain-management responsibility which stands Akufo-Addo in the stead of a chaperoning figurehead one of whose primary constitutional mandates is to guarantee the safety of his Ghanaian citizens and public properties.

That figurehead must surely have a wakeful conscience, a wellspring of chaperoning qualms—in the execution of constitutional mandates. Leadership is therefore not necessarily about the exercise of coercive power or authority as in the case of the hooliganism and vigilantism these New Patriotic Party’s footsoldiers are displaying, but how that leadership, a patriotic one, of course, adroitly manages its internal qualms of conscience in protecting the national interest.

That kind of leadership is fundamentally non-thetic in exercising the fullest continuum of its constitutional mandates. Unfortunately, power is so concentrated in the executive presidency to the extent that security institutions have to wait on the president’s express order before acting to restore or bring sanity into a country that is fast becoming relatively ungovernable. Duopoly and executive dominance add to this complexity.

Moreover, the leaderships of these security institutions became agents of political intimidation and dangerous instruments of partisan politics under the Mahama administration, just as they did under Rawlings and Kufuor, to the extent that they are gripped with, and possibly paralyzed by, fear that taking unilateral actions, however draconian, against the marauding footsoldiers of Akufo-Addo will not bode well for their post-election relationship with the new administration headed by Akufo-Addo.

They see arrogance of power and abuse of incumbency looming large on the horizon.

Why must the Bureau of National Investigations (BNI), the Criminal Investigations Departments (CID), Ghana Police, the military and the intelligence community allow the so-called Invincible Forces to usurp their authority?

FOOD FOR THOUGHT: THE PROBLEM OF REVISIONISM

“It is important for all NPP members, especially the impatient youth, to understand and appreciate better, the character of President Nana Addo Akufo-Addo. He has demonstrated patience, integrity and courage in the face of difficult times and obstacles…

“But he allowed the will of the people and the laws of the land to have their way, reassessed and readjusted his plan, which eventually has seen him achieve his ambition to have the opportunity to serve the people, as the president.

“The President believes in the rule of law. He believes in peace, honesty and fairness, and he leads by example. Through struggles and obstacles, President Nana Akufo-Addo exercised patience to bring him to the place he is today.

“This is something the youth can look up to when acts of injustice seem like the answer. They should have faith in the government they voted for, and practice patience during hard times. Good things take time, and the best is yet to come” (Statesman Opinion).

This Statesman Opinion piece does not generally reflect the true character of Akufo-Addo and the leadership of the NPP as some of us know it. In fact, it both whitewashes and sanitizes the historical records as far as the question of the predisposition of Akufo-Addo’s violent temperament is concerned.

We can recall with vivid detail how, for instance, he used his infamous “All-Die-Be-Die” war mantra to create a climate of fear in the nation and thus to coerce Ghanaians to make him the president, or else he turned the country into a bonfire of political uncertainly and ungovernability.

And we can also recall how Kennedy Agyapong reportedly egged on Akans (“Asantes”) to slaughter Gas and Ewes. Both genocidal statements sapped the political goodwill and capital of the NPP and its leadership, thereby forcing the party to tone down its trademark martial and violent rhetoric, a situation that made it possible for the party and its leadership to assume a saintly and angelic public face in the lead-up to the 2016 general elections. This deception may have worked.

The chickens have indeed come home to roost.

The only regrettable aspect of these sweeping condemnations was when Blay recently revised his earlier position, by claiming among other things that the New Patriotic Party’s footsoldiers were on a mission to “protect state properties,” a deeply worrying turn of events on the part of Blay.

Of course, Blay’s immature interpretation or version of events would have made these marauding hooligans and vigilantes patriotic citizens were it not for the fact that security personnel were, and still are, not doing their job.

Here is Awuku on the other hand:

“These are condemnable acts…We want to put on record that Akufo-Addo will create enough space for jobs…Nobody should feel threatened that someone has to vacate before they can be employed…It is early days in our government, but trust the President to create jobs.”

Certainly not. Thus Awuku’s elitist diversionary explanation will not wash. Should joblessness necessarily imply vandalism, hooliganism, and vigilantism? The idea of direct correlation between joblessness and violence seems to underpin Awuku’s childish, heartless explanation. This is why Ghanaian politics is characteristically replete with too much empty talk and hollow dreams—with less actionable deeds and strategic prudence in serious matters of political leadership.

That NDC brutalized NPP members when the former won the 2008 and 2012 general elections is a deeply regrettable and unforgivable incident. But the recriminations and counter-recriminations only worsen the present crisis situation and make its resolution far from reality. The NPP is doing it because the NDC did it. It does not pay to rub it in. Both parties are therefore caught in the web of the cycle of the politics of equalization.

Nevertheless, to get to the bottom of the root causes of this condemnable crisis situation means that the authorities must convincingly, forensically rule out members of the NDC as being behind the crisis of vandalism, hooliganism, and vigilantism. We can only hope that extreme partisan politics does not undermine this effort, for pent-up anger and frustrations do not make for vandalism.