News Ghana
Home Inside Africa Nigeria Who caused the stampede at recruitment process? 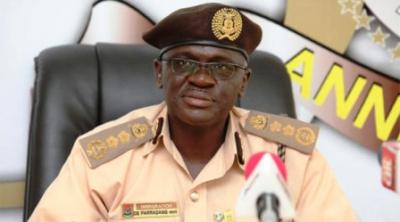 NIS Comptroller General, Minister, The Petroleum and Natural Gas Senior Staff Association of Nigeria (PENGASSAN) has declared that inordinate motive for maximum profit, without respect for due process and laid down procedures for recruitment as prescribed in the civil service rule, caused the death of job applicants at the Nigeria Immigration Services (NIS) recruitment exercise.

To this end, the union has called for the immediate arrest and prosecution of the consultant that handled the recruitment exercise, while it also demanded for the sack of the Comptroller-General of the NIS and other senior officers of the paramilitary agency who were involved in the exercise, without further delay.

Besides, PENGASSAN President, Comrade Babatunde Ogun, who condemned the recruitment procedure, demanded that the Minister of Interior, Mr Abba Moro, should step aside pending the end of a probe to be instituted by the government to determine the culpability of the minister and his officers.

For jettisoning the recruitment procedures as laid down in the civil service rules, because of their inordinate motive to make maximum profit, the PENGASSAN president said the Federal Government must act along this line without further delay to prevent re-occurrence.

Comrade Ogun kicked against the collection of the N1, 000 application fees from each of the applicants, adding that this fuelled the abandonment of civil service recruitment procedures by the consultant, the ministry and the NIS.

He said: ?It is the motive for maximum profit without respect for due process and laid down procedures for recruitment as prescribed in the civil service rule that caused the death of those applicants.

?The minister, who approved the collection of money from job seekers, the Comptroller-General and the consultant, who supervised and collected the money from applicants are driven by selfishness and greed.

?Aside from the civil recruitment service procedures, there are laid down procedures in any recruitment exercise, which include receiving applications, screening received applications by looking at the eligibility of applicants considering age, health ground, educational qualifications, height, among others. It is at this stage that the recruiters do what is called ?weeding?, where many applicants are disqualified.

?It is after that the recruiter will now decide either to divide the applicants to groups if they are still many so as to get the best of the applicants required for the posts advertised.