GMOs – Genetically Modified Organisms can be defined as organisms in which the genetic material (DNA) has been altered in a way that does not occur naturally. The technology is often called “biotechnology” or “gene technology”, sometimes also “recombinant DNA technology” or “genetic engineering”. It allows selected individual genes to be transferred from one organism into another, also between non-related species to withstand conditions that will not allow the plant to grow. For instance, plants can be modified with genes of Bacillus thuringiensis (or Bt) which produces pesticides/insecticides during sporulation so that this plant can resist insect attack. Such methods are used to create GM plants – which are then used to grow GM food crops. Some plants are also engineered to be virus resistant and weed resistant. A seed could be engineered to be resistant to multiple conditions. 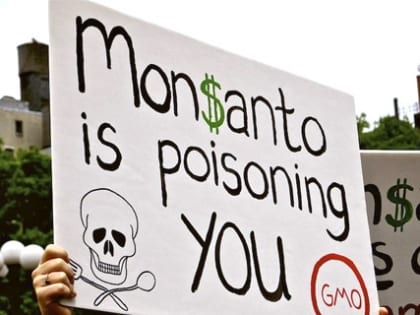 There has been a lot of debate on the subject of introducing genetically modified food in the Ghanaian food chain. With the ongoing experimental cultivation of genetically modified rice in Fumesua in the Ashanti Region and cotton going on in the six districts in Ghana’s Northern Region, there is no doubt that in the very near future Ghana will be coerced and convinced into producing large scales.

Conditions Attached and Their Implications

Contracting to grow genetically engineered seeds means that farmers are not allowed to save any seeds for the next planting season like they traditionally do. The seeds are also engineered so that they become sterile after first cultivation by use of Genetic Use Restriction Technologies (GURTs). The multinational companies have got total intellectual property rights for the plants, seeds or animals which have gone through DNA modification processes in their laboratories. Therefore farmers will always have to rely on the companies every planting season to buy their seeds. Farmers will also have to pay royalties to these companies.

Presently in Kenya, there are ongoing projects to grow genetically modified maize which is drought resistant, royalty free. However, one will wonder how long these farmers can have this ‘opportunity’ for. The moment they are able to break through the market they will definitely retract that condition and claim royalties.

GMO companies have been able to manoeuvre their way to get the law on their side so that they can operate with less moderation. The Food and Drugs Administration in America has granted volunteered labelling rights to these companies so that they choose to label foods containing genetically modified foods at their own will which definitely also goes against the right of the consumer to have a knowledge of what is contained in food. Quite recently, President Barack Obama has also signed the Monsanto Protection Act “HR 933: Consolidated and Further Continuing Appropriations Act 2013”, it assures the GM Group has a flat rate permit the cultivation and sale of its products and allows him to defy the experimental cultivation of genetically modified crops on decisions of American courts. The law prevents federal courts from stopping the sale or cultivation of GMOs or genetically modified plants or seeds, no matter how harmful to health they may prove to be the consumption of such products in the future.”

Multinational companies like DuPont, Bio, Bayer, Syngenta and Monsanto promote these products by convincing everyone that GMOs will solve the hunger problems of the world. What if there is so much food available and people cannot even afford to buy them considering the economic hardship in Ghana? What if everyone is well fed and cannot have the access to other basic necessities of life like shelter, clothing, hospital care, good infrastructure, clean communities, constant electricity and water supply in the cities and remote towns and villages?

Obviously in Ghana, the government has not been able to provide a stable economy and most of the infrastructure needed. Farmers do not even have good access roads to transport farm produce. The enforcement of health and safety laws is non-existent. Although the Food and Drug Authority has been working hard to control the Pharmaceutical industry it is not clear how ready they are to engage in the management of genetically modified foods. The production of GMOs will mean a lot of regulation to ensure food safety. This is why the EU has established a legal framework regulating genetically modified food and feed in Europe. This framework pursues the global objective of ensuring a high level of protection of human life and health and welfare, environment and consumer interests, whilst ensuring that the internal market works effectively. Ghana is just too young in information and technology to have such food crops on our farms, in the markets and then finally used to prepare food to be served on our dinner plates. Therefore GMO should be the last topic on the discussion table.

What is also apparent is that most of these companies are more concerned about making money, controlling and having monopoly on food due to their patent seeds than supporting the growth of the human population. Monsanto for example can sue a farmer who saves seed due to the patent seed right. Seeds that were given to humans by nature now belong to companies since they spent so much money in their research. It is rather interesting that they are ever ready to spend money on proving the benefits than the opposite.

Pests, weeds and caterpillars have grown resistance to the chemicals produced by the genetically modified plants and this leads to farmers spraying more pesticides and weedicides on the plants. Most GMO seeds producing companies also produce unique pesticide sprays. This means more products will have to be bought from the producer. An example is RoundUp from Monsanto which is one of the world’s largest GMO Company. Excessive exposure to pesticides can be very dangerous to farmers, the environment and also consumers. Poisoning from pesticides mainly happen in developing countries where farmers do not protect themselves appropriately. There are also long term impacts like endocrine disruptors, carcinogenic or accumulate in fatty acids. In India there have been reports of suicide cases using pesticides due to farmer’s investment in agricultural inputs and yet not making the returns expected.

The process of creating GM foods can result in damage that produces new toxins, allergens and nutritional deficiencies.

Scientists are always excited when there is a lot of activity going on in the lab so that their hard work will be appreciated and they can also gain. However, human life is so precious that such risks cannot be taken. In future, Ghana can consider researching independently into Biofuels where GM plants can be used and this can be useful for the production of diesel etc which can help fuel cars, trucks, aircrafts and other small engines like lawn mowers.

Just like other European countries namely United Kingdom, Germany, Spain and Greece have done, our local markets should be protected from big multinational corporations who only want to make money through their scientific innovation. After all, there have not been reported cases of hunger being the main cause of death in Ghana to call for the intervention of GMOs.

So far, most of these multinational corporations are not regulated so that any violation of human right can be punished and Ghana should really consider this before accepting to grow Genetically Modified Foods.

Just like all Pharmaceutical drugs, GMOs definitely have their side effects and these huge companies do everything in their power to hide any scientifically proved information about these effects. Consumers in Ghana have a right to be informed so that they can make choices.

Government should increase the support given to local farmers with the necessary implements and subsidies to continue growing and producing the natural foods nature has provided. Nature has its own ways and nothing can beat that.

BBC: Evidence of GMO being tested in Ghana

US Food and Drug Administration

Risks and Dangers of GM Foods

Local Seeds Farmers Will Become Jobless with The Introduction of GMOs

OFAB Maintains That GMO Foods are Safe for Consumption