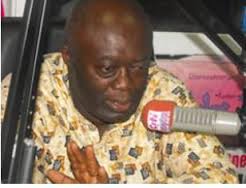 The trepidation of going to jail for causing damage to a photo album belonging to the Electoral Commission and also resisting lawful arrest has forced loud-mouth former Member of Parliament for Asokwa, Maxwell Kofi Jumah; to be avoiding the media since his trial began.

The hitherto New Patriotic Party braggart and attack-dog, known in political circles as ?Kofi Ghana?, according to family sources, fears his continuous unrestrained loose talks on radio could jeopardize his chances of avoiding going to jail.

Information gathered by The al-hAJJ indicates since his predicament started, especially, when his plea to the Attorney General to intercede failed, Kofi Ghana, who prophesied to be an Akufo-Addo apostle but recently said he would be ?terrible president?, been declining all media engagements.

A close ally of the fretting former Mayor of the Kumasi Metropolitan Assembly, who does want his identity disclosed noted that, ?for now Kofi wants to maintain a low profile because of the charges he is facing in court. He wants to concentrate on fighting the case in court rather than continue with his usual media appointments.?

The former MP and Chief Executive of the Kumasi Metropolitan Assembly is facing a possible two years prison term and a fine, for the unlawful destruction of electoral materials during his party?s parliamentary primaries at the Asokwa constituency.

Kofi Jumah, who was an aspirant in the primaries was allegedly incensed by the conduct of the polls and stormed the polling station, causing mayhem. He was immediately arrested and, had to hear the announcement of his defeat behind bars.

The former Kumasi Mayor and his campaign manager were arrested on June 13, 2015 for allegedly destroying a photo album belonging to the Electoral Commission and resisting lawful arrest, respectively.

The hearing of the case suffered a hold-up when Kofi Ghana petitioned the AG to take over the case and advice the Police on whether to continue with it or not.

While Kofi Ghana was hoping the AG would instruct state prosecutors to discontinue the case as there was media blitz that he was begging behind the scenes, the AG instead took over the case and has since gone ahead prosecuting him.

It would be recalled that when Kofi Ghana petitioned the AG, a deputy General Secretary of the governing National Democratic Congress, Koku Anyidoho, alleged that, the incorrigible Kofi Jumah has been begging the authorities behind the scenes to intervene in his criminal case in court.

Koku Anyidoho noted, ?Kofi Jumah is secretly begging the AG to intervene in his court case?.

However, since it became public that the nature of his offence, if found guilty, he could pay a fine and/or go to jail for up to two years and would then from the date of expiration of the term of imprisonment be disqualified from being registered as a voter and from voting for at least five years, Kofi Ghana is said not to have been of himself.

He is reported to have decided to put up good behavior by avoiding making some of his widely known thoughtless and inflammatory outburst on radio; so as to consolidate his supposedly backstage plea for clemency to the powers that be.

Kofi Ghana is noted for making provocative and loose talks. It would be recalled that in the heat of the campaign that saw him crushing at the party?s primaries ahead of the 2012 elections, he alleged that former President Kufuor appointed his contender, Madam Patricia Appiagyei because of her voluptuous buttocks.