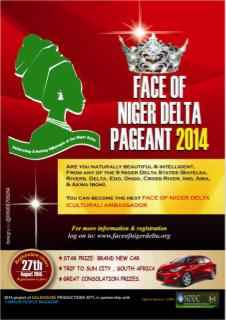 Dear Kelly has over a decade experience in the media/entertainment industry, he also had stint in TV presentation with Muzik Alive on A.K.B.C and tasted event planning as CEO of Gold House Productions, organizers of Ibeno Beach Festival, ?Face of Niger Delta Cultural Pageant since 2006, amongst other projects.

He took his love for his profession a step further by traveling to South Africa to acquire more skills, network with industry key players and learn standard practices. After sojourn in foreign land, he returns to his root (Akwa Ibom) to further a cause he had initiated years ago before his departure, now, his dream for the region is buttressed with support of Niger Delta Development Commission (NDDC) to aid building a Niger Delta of his dreams, and serving as an inspiration to other youths from the region.

In this exclusive interview, he shares his vision for a new Niger Delta, and how his team at Gold House Production & Face of Niger Delta Organization intends to turn the dream to a reality. Kindly introduce your self

Wow. Thank you so much. I must commend entertainment journalists like you; you guys have been doing a lot to keep our industry vibrant.

Godwin Attah alias Dear Kelly is a graduate of Theatre Arts from the University of Calabar.

I currently live in Johanesburg South Africa where I just acquired certification in cinematography.

How has life been in South Africa?

Life in South Africa has been fun. I told a little of the story in the single I released titled ?S.A lover?.

Well, for me, it is interesting to learn new things, new cultures and ways of doing things

What do you miss about Johannesburg?

(Laughs) I miss my S.A lover. I miss the serenity of the city. I miss my dance school classes. I miss my colleagues at Good Morning Africa/ Africa Magic.

What brought you back to Nigeria?

I visit Nigeria from time to time. But this time, I came back particularly for Face of Niger Delta 2014; it has been a project close to my heart for years since 2006

Why Face of Niger Delta, How did you come about the concept?

Face of Niger Delta is drawn form a sincere need to have someone who can tell the story of Niger Delta the way it is, while also helping proffer solutions to the challenges facing the region.

Gold House Productions International has received sponsorship from the Niger Delta Development Commission (NDDC) to produce an exceptional pageant and event that will showcase talents among youths from the region, hence the search for an intelligent damsel of Niger Delta origin to crown as queen and face of the region, she is to inspire and unite the people and serve as a cultural ambassador amongst other responsibilities.

The Star Prize for Face of Niger Delta 2014 is a brand new car, while the runner up wins a trip to Sun City-South Africa, and other consolation prizes.

Why do you think Niger Delta needs a face?

Niger Delta needs a face because we cannot continue to allow people decide our fate or tell our story. We cannot continue to allow the situation before us determine the content of our character. I feel that what Niger Delta needs is a new face, and a facelift, both in literal and metaphorical terms. We should showcase the other side of Niger Delta, our rich cultural and potentials, instead of the restiveness initially known for.

On return from South Africa, and as I tour the states in the region I discovered that the new leadership of the country and NDDC has been working assiduously, and the people are co-operating, even though there abide political differences, one thing is recurrent, the people want peace and are hungry for development, so when they see someone with a genuine intention, they embrace it.

Come Friday 10th of October 2014, all roads will lead to Uyo, capital of Akwa Ibom state for a world class event with personalities of class. The event itself will enjoy the captivating serenity and ambience of Le Meridien Ibom Hotel & Golf Resort, Uyo. It promises to be an unforgettable evening, playing host to the best from the region, and showcasing the union of her cultures.

Guests will be thrilled by electrifying performances from top Nigerian celebrities, mostly of Niger Delta origin. The MCs for the evening will be Nollywood star Dakore & Raph Edem, and we will be having cultural troupes from all 9 states of the Niger Delta

What is the Niger Delta of your dream?

Finally, I hope for a Niger Delta where there will be freedom from poverty, where peace will reign supreme, to ensure a society where everyone will not have any anxiety about the basic means of life and work, where poverty and illiteracy no longer exist, where diseases are brought under control, where facilities are provided for education & skill acquisition, offering best possible opportunities for the maximization of human potentials

My company; Gold House Production will continue to render professional media and entertainment services to individuals and companies with a high taste for standard in Nigeria & South Africa.

As for me, I will just keep doing music? (Laughs). Songs in my last album are timeless, songs of peace, freedom and hope. I intend to remix some of them, and shoot some videos in Nigeria & South Africa

Zambian Prez underscores the need for low-cost capital for Africa

Analyst calls for an introduction of a road crash app