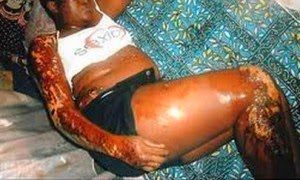 A middle-aged woman, Mrs. Monica Nwakpuke has been allegedly set ablaze by her husband for giving birth to only female children.

Her husband, Paul Nwakpuke who is a patent medicine dealer, allegedly hired some assassins to kill his wife because she could not give him a male child.

ThisDayLive reports that the three assailants laid ambush for Monica outside her father?s home, a few nights ago and when she eventually came out, they descended on her, blindfolded her, beat her black and blue and kidnapped her on their motorcycle.

?They doused her with fuel, set her on fire and when they discovered that she had been severely burnt to the extent that she may not survive it. They abandoned her and ran from the scene,? sources told ThisDay.

Passersby found her and took her to the Federal Teaching Hospital, Abakaliki where she is reportedly battling to stay alive.

The victim?s younger brother, Mr. Sunday Nwigbo has said Paul was responsible for the incident. Nwigbo disclosed that Paul had always been furious with his wife of 12 years for only giving birth to female children.

The husband is said to be on the run at the moment..