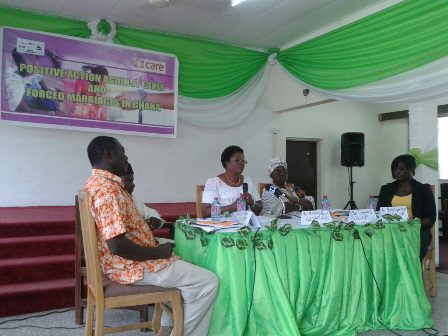 Women in Law and Development in Africa (WiLDAF) Ghana, a rights-based women?s non-governmental organization (NGO) and Care International have expressed grave concern about the pervasive nature of the practice of child early and forced marriages in the country.

?According to the two organizations, the practice has served as a barrier to women?s attainment of economic, political, legal, health and social equality with men, which impedes the development of communities and the nation as a whole.

Against this backdrop, WiLDAF and Care International called on??civil society organizations (CSOs) and Ghanaians to continue to amplify their voices in the advocacy efforts by holding government and Members of Parliament (MPs) accountable for their promises of taking action to end early and forced marriages in Ghana.

Addressing a press conference to commemorate International Women?s Day in Accra, a Board Member of WiLDAF, Ms. Magdalene Kannae charged the government through the Ministries of Gender, Children and Social Protection, Local Government and Rural Development and Metropolitan, Municipal District Assemblies (MMDAs) to devise proactive measures to stop early and forced marriages in Ghana.

Flanked by the Chief of Adum Awuila in the Eastern Region Nana Senyeawuo II, Ms. Kannae stressed that the action to stop child forced and early marriages should include protection for victims, rescued girls including shelter, rehabilitation, education and skills and protective court orders.

Giving the statistics on early child marriages, she said 14 million children under the age of 18 marry each year worldwide.

However in Ghana, she stated that, a survey conducted by WiLDAF revealed that Ghana has one of the highest child marriage prevalence rates in the world, with one out of every four girls get married before their 18thbirthday.

Mrs. Kanaealso noted that the time has come for all to highlight issues of forced and early marriages by draw attention to issues affecting women and girls, and finding ways to address them.

?Even though gender inequality, tradition, religion, teenage pregnancy, poverty, conflicts, disasters and emergencies appear to be the root causes of early child and forced marriages failure on the part of duty bearers to enforce laws, ignorance of the existing laws, and the apparent lenient penalty/ punishment contained in current legislation appear not to be deterring enough to curb the menace,? she said.

Speaking on the global theme: ?Inspiring Change,? Ms. Kannae indicated that the action is about stimulating positive transformations in the lives of women and children by challenging the status quo.

According to him, Ghanaians should endeavor to inspire a greater awareness on gender equality, equal recognition of women in the arts, science and technology, and increasing financial independence of women.

For her part Nana Senyeawuo II who chaired the event recognized the roles played by WiLDAF, Care International and other women?s right organizations at the forefront of empowering women by promoting their rights and contributing to increasing the participation and influence at the community, national and international levels.

The chief noted that the international women day must be used to highlight the negative effects of early and forced marriages in Ghana.

Nana Senyeawuo II also mentioned that the choice of who to marry and when to marry is ones of life?s most important decisions, and that no well-meaning person has the right to make that decision for any girl.

?The decision to marry should be a freely made, informed decision that is taken without fear, coercion, or undue pressure,? she stressed.

She however appealed to the media to use the information to educate and sensitized the public to end early and forced marriages in Ghana.

Madam Mercy Nyamekeh of Care International explained that the organization has done a lot in areas of Women empowerment, by identifying problems affecting women, guided by long-term framework to enable them overcome poverty.

She emphasized that over one billion women will be victims of violence in their lifetime, and every 1 out of 9 girls forced to marry before their 12th?birthday.

She averred that Care International decided to associate itself with this year?s celebration of International Women?s Day because; women and girls make up the majority of the world?s poorest people

And that she said her outfit is joining the crusade to ensure that their socio-economic status is enhanced, emphasizing that child marriage is gross human rights violation which sentences girls to uncontrolled poverty.

Women’s equality has made positive gains but the world is still unequal. The day, International Women’s Day celebrates the social, political and economic achievements of women while focusing world attention on areas requiring further action.

It?encourages advocacy for women’s advancement everywhere in every way.

However, it was established that the vast array of communication channels, supportive spokespeople, equality research, campaigns and corporate responsibility initiatives means everyone can be an advocate inspiring change for women’s advancement.

How to stop security threats early

Work together to end child marriages