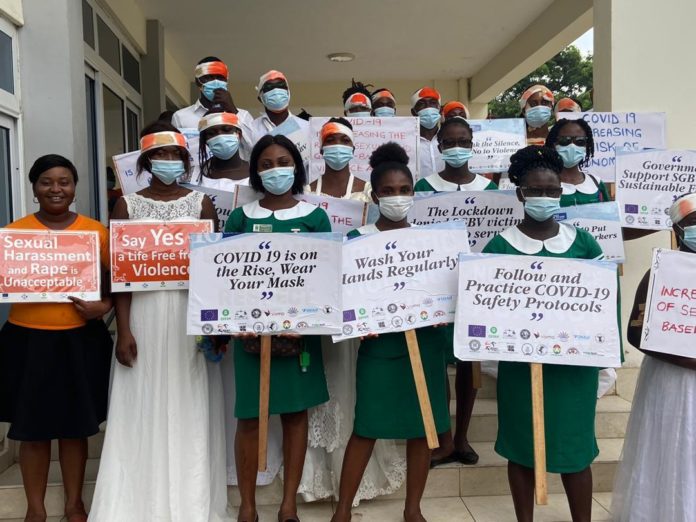 Women in Law and Development Africa (WiLDAF Ghana) has organised a campaign, dubbed; “Faces of Violence Street Campaign” to commemorate the 16 Days Activism against Gender-Based Violence.

Organised in collaboration with partners, the campaign sought to generate public discussions on ending Sexual and Gender Based Violence (SGBV) within social spaces.

It is on the theme; “Reflecting on Sexual and Gender Based Violence in the Wake of COVID-19”.

Some of the messages read: “Lockdown Patriarchy,” “Say Enough to SGBV,” “Women and girls were locked down with their violators,” “Lockdown denied women and children access to services.”

Ms Lois Aduamoah-Addo, the WiLDAF Programmes officer, in an interview with the Ghana News Agency, said the campaign was to inform the public about the global celebration of 16 days of activism.

She said it was also to encourage others to join the campaign to end all forms of violence against women and girls.

“It is to generate a national discussion on all forms of violence against women and girls and contribute to supporting a number of these recruited young women,” she stated.

Ms Aduamoah-Addo said it was important that Ghana learnt from the COVID-19 pandemic and forged forward, while ensuring that in case of a second wave as witnessed in other countries, the country would be well prepared.

She called on government to promote sustainable funding for SGBV works and resource State institutions to effectively deal with such cases.

She urged the public and survivors to report cases of SGBV or seek for help during such moments for perpetrators to be punished.

Ms Aduamoah-Addo noted that aside the campaign, her outfit would embark on media engagements, outreaches, mobile clinics, and webinars on survivors’ access to justice.

She expressed gratitude to Oxfam Ghana, the European Union, Plan International, Global Affairs Canada, and the French Embassy for their support.

The event, “16 Days” is an annual international campaign spanning the period of November 25 – the International Day for the Elimination of Violence against Women – to December 10- Human Rights Day.